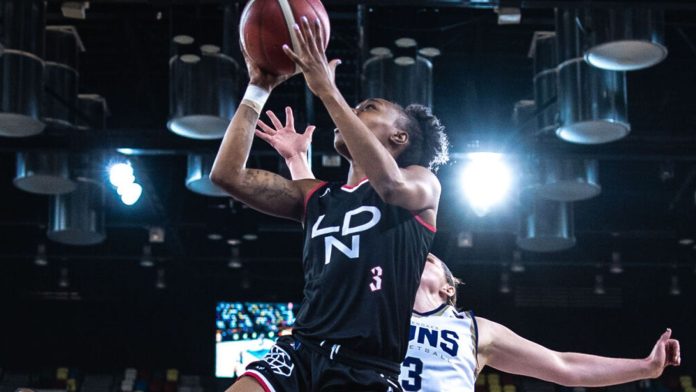 Watch London Lions take on the Sevenoaks Suns in the WBBL Final, with coverage beginning at 12.45pm on Sky Sports Arena and Sky Sports YouTube. Next up, it’s the BBL Final, with the Lions playing the Leicester Riders from 3.45pm

Up to 15,000 fans are expected at the O2 Arena for Sunday’s BBL and WBBL Play-Off Finals and the London Lions will appear in both hoping to complete a historic double.

It’s been a stellar season from the Lions so far and they have the chance to claim British Basketball League glory on both the men’s and women’s side. It would represent the first time every a team has managed to do that, as they aim to go one better than last year when the women’s team won but the men’s team fell at this same stage.

They are the final pieces of silverware available to be grasped following a fantastic season of action on Sky Sports. The showpiece will also feature UK artist and producer Ayo Beatz performing a half-time show during the BBL Final, while UK dance group Flawless will perform during the interval of the WBBL Final.

The men’s team have been breaking barriers, becoming the first British basketball team to make the second round of the FIBA Europe Cup, as well as reaching the BBL Trophy final.

The London Lions women’s team have also broken records this season – posting the longest win streak in WBBL history and going invincible in the WBBL Championship with a perfect 24 wins from 24 games. Having already secured the WBBL Championship, Cup and Trophy, they have the potential to complete a historic domestic clean sweep with a playoffs win on Sunday.

Brett Burman, general manager of the London Lions, said: “We have had a record-breaking season with our amazing European journey. I am so proud of this team with not only our on-court performance but also our off-court initiatives.

“We strive to give back to our local community and we are so appreciative of the support they have shown us this season. But ultimately with basketball it’s all about who the last team standing is. The game on Sunday is monumental for us and we are ready to perform”

The dream of an unprecedented quadruple lives on for the London Lions who swept into the play-off final with a dominant 104-59 semi-final win over Scotland’s Caledonia Pride. Holly Winterburn top-scored for the Lions, who are unbeaten in all matches during their domestic campaign.

In the other last-four clash, Sevenoaks Suns secured their place in the final with a nail-biting 66-64 victory over Nottingham Wildcats. Janice Monakana was the standout player for the Suns notching up 24 points for her team.

It’s a match-up of the top two seeds from the domestic season but Mark Clark, London Lions women’s team coach, is feeling confident.

“Obviously we’ve played and beaten Sevenoaks four times this season,” said Clark. “Our WBBL Trophy Final was one of our best defensive performances of the season. We felt they had not understood the level we were playing at and we had taken our EuroCup level into that final.

“The two league games were more competitive and we have prepared believing they will give this final their best shot. They will need to bring something different if they are trying to get the win. Whether that’s slow-down basketball or a different defensive setup, we believe we have prepared for whatever they bring.

“Ultimately, our team ethos is what has been key to our success this season – we pass the ball better than any team and respect each others’ strengths. Our defense has brought us success this year and our pressure will again be the difference.

“Our organisation has serious aspirations and that requires us to be better every game. We will be better again on Sunday.”

On the men’s side, the London Lions rampantly made sure of their place in the final with a 176-156 aggregate victory over Bristol Flyers. Former Santa Cruz Warriors (Golden State’s G-League affiliate) player Isaiah Reese powered the Lions into an unassailable lead in the second leg with a strong 28-point performance.

The Leicester Riders finished with a fantastic 25-2 record in the final standings, grasping the top seed emphatically and finishing well ahead of the No 3 seed Lions, who went 16-11. The Riders secured a comfortable 209-162 aggregate win over Glasgow Rocks in their semi-final which concluded on Monday night, with former Gonzaga college player Geno Crandall contributing 54 points over the two legs.

“For us, it’s just about playing team basketball and staying together through adversity throughout the game,” he said. “We can’t get too high or too low because Leicester is a really good team and they have proved it all season. We just have to go out play our game and approach this with the right mindset as a team.”

Burman added: “This game is unique because it’s a winner take all event. Both teams have already played four playoff matches and have had all week to scout, strategise, and understand each other to a higher degree. They have weapons, and their tempo starts and stops with Geno (Crandall). They are at their best when he creates open looks for others.

“Our focus has shifted and at this point, the regular season is out the window. Once the ball is tipped, it’s a 40-minute battle. This is the moment we want, and I know our guys are ready to play on the big stage, under the bright lights. As a competitor, you can’t ask for anything better than this.”

Watch all of the action live on Sky Sports YouTube and Sky Sports Arena this afternoon.