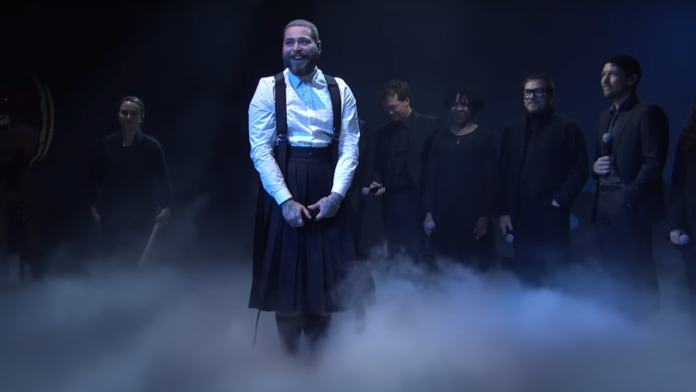 Post Malone has made his Saturday Night Live debut, performing songs from his new album Twelve Carat Toothache. For one of the songs, “Love/Hate Letter to Alcohol,” Malone was joined by one of his favorite artists: Fleet Foxes’ Robin Pecknold, who sang in a choir behind Malone, slightly obscured by a fog machine. Two percussionists playing taiko drums flanked the rapper for the moody performance. For his live rendition of “Cooped Up,” Malone wore head-to-toe leather and was joined by Roddy Ricch on the SNL stage. Ricch appears on the recorded version of the single—Malone’s latest release from Twelve Carat Toothache. Watch it all go down below.

Pecknold previously performed on Saturday Night Live in January 2009. According to the Fleet Foxes musician, he and Post Malone wrote “Love/Hate Letter to Alcohol” with producer Louis Bell. He elaborated in an Instagram story, explaining that he’d written a song for the rapper called “For Post Malone” in 2019, “as private thanks for him being so nice about [Fleet Foxes] in the world.” He noted that he recorded his contribution to the track last year.

Post Malone has long expressed his adoration for Fleet Foxes, tweeting about the band, singing Helplessness Blues songs, and calling Pecknold “a great writer” in a 2018 interview with Billboard. All of that admiration turned into a legitimate friendship and professional relationship. “He’ll text me every once in a while, and it’s always a really fun thing to receive,” Pecknold said of Post Malone in 2020. “To have that pop up in my iMessages, it always feels like a glitch in the Matrix or something.”

“He came by the studio for one day while we were working in L.A. and listened to stuff and was super supportive,” Pecknold added. “We didn’t get together in time because I wanted to get the album [Shore] out quickly, but I did ask him to be on it. He was down but we just didn’t end up having time.”

“He’s a super sweet guy; he’s a real gentleman; and he’s probably the best melody writer in the business right now, I think,” Pecknold also said, “and by some glitch in the Matrix we have a casual friendship.”

Twelve Carat Toothache is out June 3. In addition to “Cooped Up,” he record includes the single “One Right Now.”