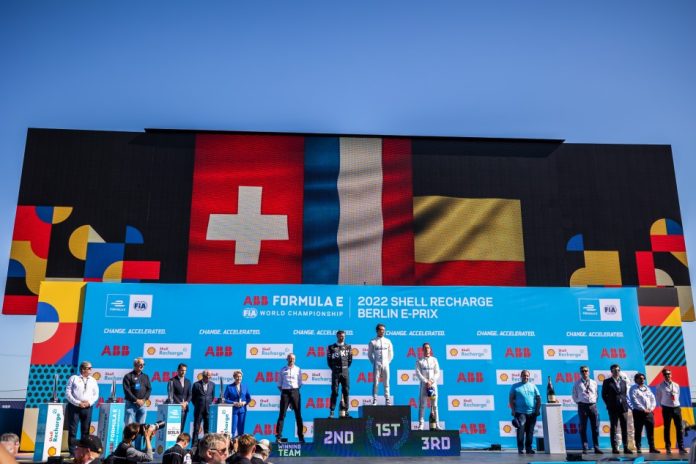 Reigning Champion Nyck De Vries turned his weekend around in spectacular fashion to return to the top of the podium – sealing Round 8 of the ABB FIA Formula E World Championship.

The Mercedes-EQ driver endured a subdued opening race of the weekend, finishing a lowly tenth in Round 7 on Saturday, but with the Berlin Tempelhof Airport Street Circuit layout reversed for Sunday’s racing (15 May) – De Vries was spurred into recapturing his title winning magic of old.

It was to be Saturday hero Edoardo Mortara for ROKiT Venturi Racing who captured his second pole of the weekend, and with it a further handful of points in the qualifying session, with Envision Racing’s Robin Frijns locking out the front row and De Vries in third.

As the race went green, it was to be Frijns and De Vries who got the better of the starts – surrounding the pole man Mortara into turn one. With Mortara defending from Frijns on his outside, that encouraged a Mercedes sized gap for De Vries to brake as late as he dared to slide-up the inside – a brave move that reaped its rewards, as the Dutchman led coming out of the packed turn one.

Leading the early stages, De Vries, confident in his pace was also the first of the top-five to use the Attack Mode, which for the final race of the weekend was a one-shot – eight minute burst. Dropping down to third behind his first corner sparring partners, the tactful De Vries bided his time as he plotted his clinical overtakes. The first position was handed to him, as Frijns elected to sweep into the Attack Mode zone, but missed the activation point, causing double the frustration for the Dutchman, with no extra power and a drop to fourth behind Mortara’s Venturi stablemate Lucas Di Grassi.

Up into second, De Vries used his superior Attack Mode speed with 32 minutes left on the clock, with a textbook move on Mortara into turn five. The Dutch driver then began to stretch the legs of the Mercedes in clean air. Like 24 hours before, Mortara was one of the last drivers to opt for the Attack Mode, and deployed the extra boost seven minutes behind De Vries, with the Swiss driver down in fifth at this stage. The Venturi driver carved his way through the pack with a return to second just five minutes later. However, De Vries had an answer to Mortara with his initial gap only eroded slightly as the former champion matched the on-form Mortara’s every move.

De Vries would show his title winning prowess by holding a near three-second cushion over his fellow driver – charging his way to a second E Prix victory of the season in the Silver Arrow. Giving Mercedes a victory on home soil also bolstered his own title ambitions –  moving into fifth in the standings. Mortara can be pleased with his weekends work, as the Venturi star nearly chalked-up a clean sweep, with two pole positions, a race win and a second, which also launched him into second in the title chase.

The man he now sits behind was Mercedes-EQ driver Stoffel Vandoorne, who like the day before had to content with a race of battling his way through the field. The Belgian ace enjoyed wheel-to-wheel racing aplenty in the race, as he carved his way through the positions –  enjoying several dices with Di Grassi. The Brazilian showed an upturn in form in the second round of the weekend, as he sold Vandoorne the dummy for a move early in the race before the drivers locked horns again in the closing stages – with Vandoorne returning the favour, with a sneaky move up the inside at turn five to see him clinch back-to-back podiums, and extend his gap in the title race – with a 13-point margin now in the hands of the Belgian driver.

Di Grassi made it a Mercedes powertrain top four as he nestled his Venturi into fourth overall. A strong weekend for Venturi sees them occupy second in the Teams’ Standings behind Mercedes-EQ who tightened its grip on the table following the double-header on home soil.

Robin Frijns who was left ruing his early activation mistake had to get his elbows out and fight for every position if he was to have any hope of keeping his title flame burning. Antonio Félix Da Costa was having a consistent and strong drive and had made his way ahead of Frijns following a clever use of Fan Boost in the final third of the race. Set for fifth, Da Costa defended the position for all his life, with the pair banging wheels on the final lap as Frijns captured the upper hand with just a handful of corners remaining to seal fifth as Da Costa held his ground to keep his car in sixth.

British ace Oliver Rowland put in one of his best performances of the season, with the Mahindra Racing man netting seventh at the flag ahead of Tag Heuer Porsche driver André Lotterer who slipped backwards from his second row grid slot – salvaging eighth as the clock struck zero.

At the climax of the Berlin weekend, championship hopefuls Jean-Éric Vergne (DS TECHEETAH) and Mitch Evans (Jaguar TCS Racing) were nowhere near the front running pace. The pair languished at the bottom of the top-ten, struggling with the increased heat on the German concrete, as they finished nineth and tenth on the road –  with Vergne using his Fan Boost to nip ahead of the New Zealander. How important those points could be in the title race, will remain to be seen.

With the series reaching its halfway point, the run into the season finale will be all the more important to all the drivers and teams. The next stop on the ABB FIA Formula E World Championship calendar will be Indonesia, with the Jakarta circuit home to the all-electric series on Saturday 4 June.

NYCK DE VRIES, MERCEDES-EQ FORMULA E TEAM, #17 said: “We have had a difficult ride the past three races, so honestly I am just very pleased to be back. Of course [I was worried about the driver challenges behind], Edo had been very strong all weekend so we definitely had to keep it clean, but the team managed it very well on their side and I executed it. I am very pleased.”

EDOARDO MORTARA, ROKiT VENTURI RACING, #48 said: “The race was quite good obviously, we are standing here on the podium. But congrats to Nyck and Mercedes, they were having a better pace than us. I was trying to hang with him, but he was definitely quicker in the end. It is still a great weekend for us, two pole positions, a victory yesterday and a second place today.”

STOFFEL VANDOORNE, MERCEDES-EQ FORMULA E TEAM, #5 said: “It was a pretty good race to be honest, a little bit less action than yesterday for me. But nonetheless it is great to be back on the podium, our cars were flying again today and after a tricky qualifying it was important to not lose momentum and to get back to speed in the race. But a double podium this weekend, I am definitely happy with that.”

Iran’s sweeping internet blackouts are a serious cause for concern