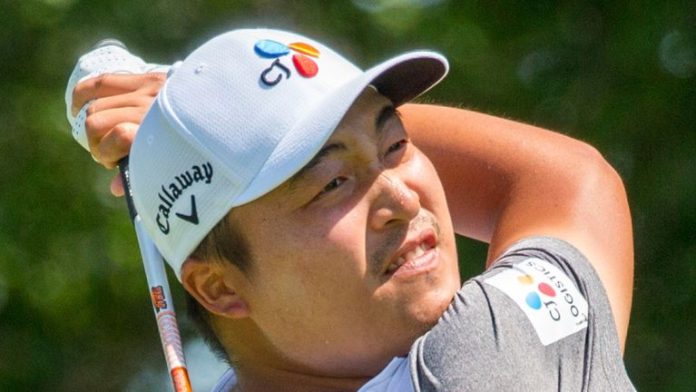 Lee finished one ahead of Spieth and becomes just the fourth back-to-back winner in tournament history; Hideki Matsuyama, Xander Schauffele and Justin Thomas all post top-five finishes ahead of the PGA Championship

K.H Lee ended a torrid run of form by overcoming a star-studded leaderboard and completing an unlikely title defence at the AT&T Byron Nelson in Texas.

The world No 88, who came into the event with just one worldwide top-10 since his breakthrough PGA Tour win in last year’s contest, overcame a four-stroke deficit during a low-scoring final day at TPC Craig Ranch to claim an impressive victory.

Lee carded a bogey-free 63 to end the week on 26 under, breaking the tournament record he set 12 months earlier, with the victory seeing him become the first player since Tom Watson in 1980 to claim successive AT&T Byron Nelson titles.

“It [winning] feels amazing,” Lee told Sky Sports. “I’ve struggled with my game the past couple of months and I’ve had no top-10s this year, but when I’m here I’m more comfortable and more confident. I’ve tried my best and maybe being here has helped me.”

Home favourite Jordan Spieth finished a shot off the pace despite a five-under 67, while a final-round 62 jumped Hideki Matsuyama into a share of third alongside overnight leader Sebastian Munoz.

Lee drained a 50-footer at the second for the first of four birdies in a five-hole stretch, with the Korean adding another at the par-five ninth to see him reach the turn in 31.

An incredible approach from the middle of the 12th fairway set up a close-range eagle and a 15-foot birdie at the next moved him to eight under for the round, before he squandered the opportunity to extend his advantage when he three-putted from 40 feet to par the driveable 14th hole.

Lee holed clutch putts at the 16th and 17th to stay ahead of Spieth and the chasing back heading to the par-five last, where a two-putt birdie from 25 feet set a clubhouse target that couldn’t be matched.

Spieth had made an erratic start with bogeys either side of an eight-foot birdie at the second but then made four birdies in five holes from the fifth, only for the three-time major champion to register a three-putt bogey from inside eight feet at the par-four tenth.

The former world No 1, who could complete the career Grand Slam at the PGA Championship next week picked up shots at the 12th and 14th before responding to a missed birdie opportunity at the 17th to take advantage of the par-five last.

Justin Thomas claimed a share of fifth alongside Ryan Palmer and Xander Schauffele, who carded a round-of-the-day 61, with 14 players finishing 20 under or better during a birdie-filled contest.

Ireland’s Seamus Power heads to the PGA Championship off the back of a tied-17th finish, while England’s halfway co-leader David Skinns ended in a share of 38th after rounds of 74 and 70 over the weekend