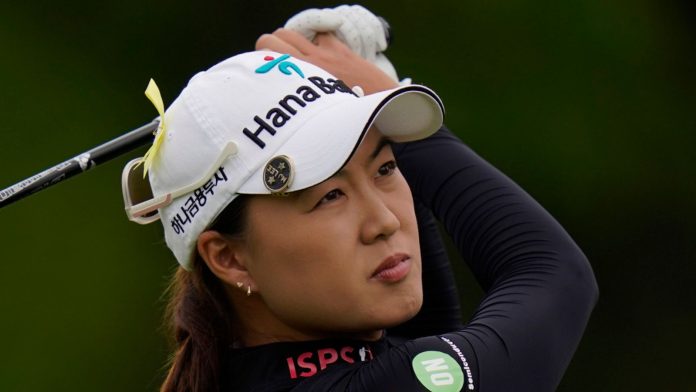 LPGA Tour scoring leader Lee made her only three birdies on the back nine and captured the Cognizant Founders Cup by two shots over Lexi Thompson on Sunday; Angel Yin and Madelene Sagstrom finish in a share of third

Minjee Lee produced an impressive finish to edge past Lexi Thompson and register her first LPGA Tour win of the season at the Cognizant Founders Cup.

Lee was over par with seven holes of her round remaining at Upper Montclair Country Club, only to take advantage of the par-five 12th and 14th and birdie the par-four last to close a two-under 70 and end the week on 19 under.

The Australian finished two strokes clear of Thompson, who remains without an LPGA Tour victory since 2019, while Sweden’s Madelene Sagstrom stuttered to a final-round 72 to finish in a share of third with American Angel Yin.

Lee’s success is her first since securing her maiden major title at the Evian Championship last summer, with her victory also the seventh of her LPGA Tour career so far. The latest win is projected to move her from 13th to third on the Race to the CME Globe points list.

“I wasn’t that nervous, but obviously I wasn’t striking it as well as I wanted to,” Lee admitted after her win. “I still drove it and putted it really well, so trying to take the positives. At the end of the day I still got the job done, so I’m happy.”

Carlota Ciganda birdied six of her opening eight holes one her way to a final-round 64, leaving the Spaniard in fifth spot, with Nasa Hataoka a further stroke back alongside Megan Khang. Thailand’s Atthaya Thitikul also finished inside the top-10 after a round-of-the-day 63.

“I really needed a good week, a good tournament to get some confidence, and I’m very happy it was in this tournament,” Ciganda said. “Now starting the summer with the US Open in a couple of weeks and the KPMG [Women’s PGA Championship], so I’m happy with the way I played, but I want to keep playing and still some work to do in the summer.”

World No 1 Jin Young Ko posted a three-under 69 to finish the week inside the top-20, while Jodi Ewart Shadoff and Gemma Dryburgh led the British interest as they both ended the week on three under.