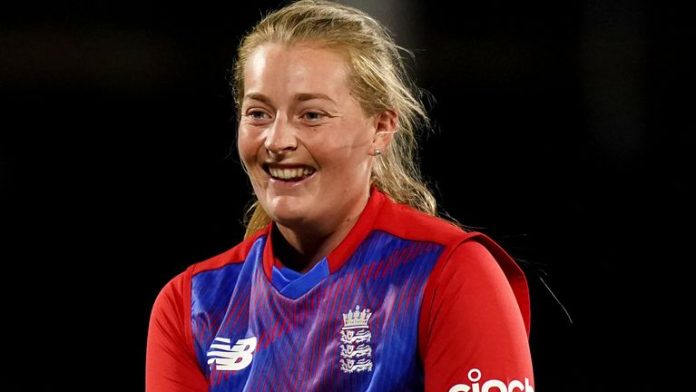 World No 1 T20 bowler Sophie Ecclestone has been drafted by Supernovas for T20 Challenge in India; she will be joined by England team-mates Kate Cross and Sophia Dunkley who will represent Velocity and Trailblazers in three-team tournament

England trio Sophie Ecclestone, Kate Cross and Sophia Dunkley have been signed up as overseas players for the forthcoming Women’s T20 Challenge in India.

The three-team tournament, a bridging event to the planned women’s Indian Premier League next year, takes place from May 23-28 at Pune’s MCA Stadium, with each team is made up of 16 players including four overseas picks.

Left-arm spinner Ecclestone has long sat atop the bowling standings in T20I cricket and has now ascended to the top of the ODI charts too, and has been drafted by the Supernovas for the challenge.

Fast bowler Cross will play for Velocity and batter Dunkley will represent the defending champions, the Trailblazers, who won the trophy in 2020.

England Women restart their international campaign in June, when South Africa are the opposition for one Test, three ODIs and three T20s.

Tammy Beaumont, England’s opening batter, is adamant women’s cricket in England can continue its upward trajectory – if more funds are ploughed into the sport and comparisons with the men’s game come to an end.

The 31-year-old, part of the England side that recovered from three straight defeats at the start of the recent World Cup to make the final, told Sky Sports: “The game can definitely still go higher.

“The biggest thing that sometimes holds it back is the comparison to the men’s game – people saying ‘women don’t bowl 90mph, don’t hit sixes, don’t hit the ball as hard’. It can kill the game.

“But it doesn’t help if people say, ‘she wouldn’t do very well against Jofra Archer, would she?’ Those sorts of things really aren’t helpful.”

Italy is voting and could have its first woman PM –...