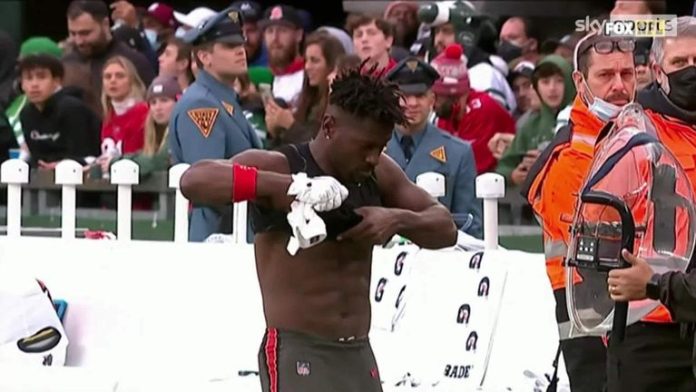 Antonio Brown tweets: “Just wanna Retire A Steeler”, later pinning the post to the top of his profile and adding in a follow-up: “Not Play Jus Retire so we Clear”; the 33-year-old was released by the Buccaneers after leaving mid-way through a Week 17 game during the 2021 season

Free agent wide receiver Antonio Brown took to social media Monday, saying he wants to retire as a member of the Pittsburgh Steelers – despite his acrimonious break-up with the team in 2018.

“Just wanna Retire A Steeler,” Brown tweeted, later pinning the tweet to the top of his profile. “Not Play Jus Retire so we Clear,” the 33-year-old added in a follow-up.

It was not clear whether the controversial figure meant he was ready to retire from football now. In March, Brown expressed an interest in joining the Cleveland Browns.

Brown was named to seven Pro Bowls and five All-Pro teams during his nine-year stint with the Steelers (2010-18), totaling 837 receptions for 11,207 yards and 74 touchdowns. But after he got into an argument with quarterback Ben Roethlisberger and was benched for an important Week 17 game for missing practices, he requested a trade after his 2018 season.

After stops with the then-Oakland Raiders and New England Patriots, Brown last played for the Tampa Bay Buccaneers in the 2021.

He played in the team’s Super Bowl LV win over the Kansas City Chiefs, scoring the third touchdown of the game as he secured his first and only rind.

But, like in Pittsburgh, his departure from Tampa Bay was a controversial one as removed his pads and jersey and left the field during the third quarter of a Week 17 road win over the New York Jets last season.

A few days later, the Buccaneers released Brown and the wideout claimed the team forced him to play hurt and covered up facts related to his injury. Then-head coach Bruce Arians denied the allegations.

Brown told TMZ Sports in March he won’t undergo an ankle surgery he needs until he has a deal with a new team.

Brown has a trail of off-the-field incidents, distractions and legal trouble during his NFL career. He spent the first half of the 2020 season suspended for multiple violations of the NFL’s personal conduct policy. He turned himself into police in Florida in January 2020 due to charges of battery, burglary of an unoccupied conveyance and criminal mischief.

He was released by the Patriots after one game in 2019 due to allegations of sexual misconduct and of sending threatening text messages to his accuser. New England had picked up Brown after he was released by the Raiders without playing in a competitive game for the team.