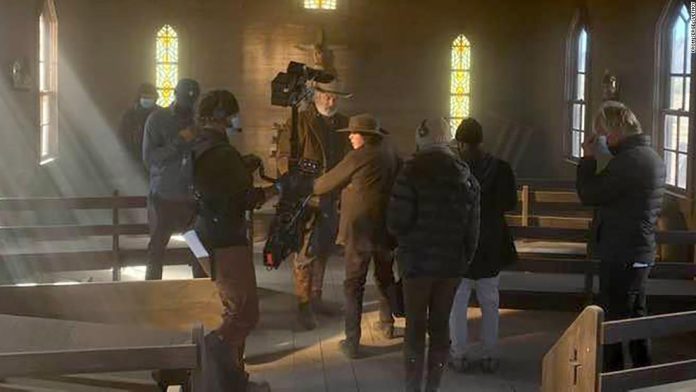 In an interview published Monday by The Hollywood Reporter, Anjul Nigam, co-producer of “Rust” with actor Alec Baldwin, said he believes they’ll be able to finish “Rust” once the investigation into the shooting incident is complete.
“‘Rust’ is obviously a horrific tragedy,” Nigam told the publication. “The investigation will hopefully be resolved soon and will unveil what happened. Obviously, there will be people out there who will have negative perspectives, but we’re confident about continuing to make quality movies.”
Hutchins was shot and killed on Oct. 21 on the New Mexico set of “Rust” when a firearm held by Baldwin was discharged as they were rehearsing a scene. The investigation by the Santa Fe County Sherriff’s Department in ongoing.
Nigam said they are “confident” they’ll “be able to complete the movie” once the investigation is complete.
Nigam also announced plans for a new film project with Baldwin, called “False Awakenings,” in which Baldwin will star. They plan to begin production this summer.
CNN has contacted representatives for Nigam and Baldwin for comment.
Hutchins’ family filed a wrongful death suit against Nigam, Baldwin, the “Rust” crew and production company in February.
“We continue to cooperate with the authorities to determine how live ammunition arrived on the ‘Rust’ set in the first place. Any claim that Alec was reckless is entirely false. He, Halyna and the rest of the crew relied on the statement by the two professionals responsible for checking the gun that it was a ‘cold gun’ — meaning there is no possibility of a discharge, blank or otherwise,” Aaron Dyer, attorney for Baldwin and other producers of “Rust,” said in a statement to CNN at the time. “This protocol has worked on thousands of films, with millions of discharges, as there has never before been an incident on a set where an actual bullet harmed anyone.”
In April, Rust Movie Productions was fined nearly $137,000 by the New Mexico Environment Department’s Occupational Health & Safety Bureau for safety violations.

Everybody knew the accusations about R Kelly – so why did it take 30 years to get justice?

‘Who’d have thought it?’: Scores of Glastonbury revellers test positive for COVID

George Clooney and Julia Roberts reunite for ‘Ticket to Paradise’