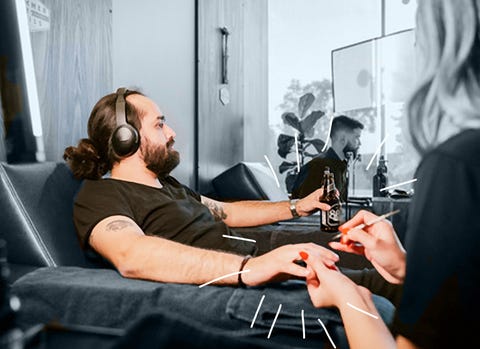 Gentlemen, warmer temperatures are here, and we need to address the state of our feet. The wearing of flip-flops and shower shoes has transcended the pool party and spread into the grocery store, the airport, the restaurant. Places that were once the domain of whole-foot shoes are now places where you have to look at the back part of someone’s heel—that special area where even the most fastidious gentleman looks like an ostrich. It is our responsibility to the world to put our best feet forward.

But I have good news for you, my dude: it is finally safe for you to get a pedicure. I mean, it always has been, but now there are spas dedicated to giving men the treatments they need, in a way that does not threaten their insecure masculinity. One such men’s spa is Hammer & Nails Grooming Shop for Guys, a chain with 18 locations around the country, and one of the secrets of their success is avoiding the word spa: “The way we speak about our brand matters,” says Aaron Meyers, Hammer & Nails’ CEO, “and using words like spa or salon tends to make guys feel like they’re going to their woman’s business.” Meyers knows what he’s talking about; fifteen years ago, when he started as an executive at Massage Envy, 99 percent of that company’s clients were female. “In fifteen years, we got guys to go from ‘don’t touch me’ to ‘I’m a better husband, a better father, a better professional when I have less pain,’ and now half of Massage Envy’s members are male.” Meyers says a complete grooming experience is as important as a good massage, so if Hammer & Nails has to put a treatment on their menu called the Sports Pedicure to get guys to give it a try, then that’s what they’ll do. I booked myself in for a Sports Pedicure, because how can you not? Put me in, coach; it’s slip-on espadrille season.

You get to kind of sit there for a while and relax and really take in how problematic Cops is from today’s perspective.

Any doubt that Hammer & Nails would be safe for dudes was destroyed—as if by a bat, like the kind used in baseball—the moment I walked in the door. Foo Fighters’ “Best Of You” was playing at an aggressive volume, bouncing off the heavy wood and the corrugated tin of the man-cavernous space. The receptionist offered me a whiskey, and seemed genuinely taken aback when I declined. It was 11am on a weekday. “It’s five o’clock somewhere,” she said, and while I appreciated the spirit, it is not five o’clock wherever I am until noon at the earliest. A man must have discipline.

My foot technician was a sunny young woman named Mia. “Like ‘Wallace,’” she said. (“A Pulp Fiction reference will put a guy at ease,” she has definitely been told.) Mia sat me in an absolutely massive leather chair, and began the treatment by soaking my feet in a tub of hot water infused with lavender. (Sports lavender.) Just hot enough, and so soothing I began to relax around the idea of revealing my toes to a stranger.

There were flat-screen televisions all around the treatment room, but it was a little early in the day to find any live sports, so they were mostly playing Cops and Tosh.0. The music was parked in right around the same magical mid-aughts moment: OutKast’s “Ms. Jackson,” Baby Bash’s “Suga Suga,” no fewer than three songs that featured Ja Rule. So they’re not just targeting guys, they’re targeting guys of a certain age—that sweet spot from 35 to around 50, consisting of guys who are beginning to have a little more disposable income, guys who are starting to take care of themselves a little better but haven’t done the internal work that might allow them to get a pedicure without the word “sports” in front of it. As someone in the upper end of that demo, I was put right at ease by the music, and I also began to ask myself some hard questions about what the senior-living communities of the 2050s might sound like. 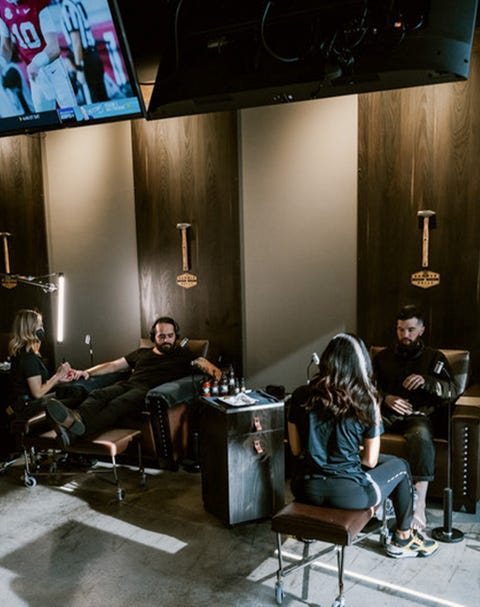 Dudes getting their nails done at Hammer & Nails.

Incidentally, the “sports” of “sports pedicure” derives not from the pedicurist placing your foot on a soccer ball as she works your nail beds, or painting Kobe Bryant’s number on your toenails. The “sports pedicure” is for guys who are active and hard on their feet. Guys like me! I am a runner who has straight up lost toenails in marathons, which is both less alarming than it sounds and probably less gnarly than what women have to endure with Louboutins. But still, worthy of the care of a skilled technician like Mia.

Next, it is on to the callouses. “A lot of dancers keep their callouses intact,” Mia says. I am not a dancer in any professional sense, but I have kept my callouses intact through a process I call “never doing anything about my callouses.” This is the part I’ve been dreading, and for the first time in this visit, I am wishing this space were more like a man’s garage, because a power-sander would seem to be the best tool for the job. Mia goes at it with a shaver and a rasp, and she does it much more cheerfully than I would if I were that close to the bottoms of my own feet. Mia makes progress, but it will still take a couple more visits before that area is cleared for public viewing. (That is on me, not Mia.)

After some trimming and buffing of the nails—they don’t do polish, which is a shame because a bold red would be a real swerve at a sports pedicure—there is a salt scrub, during which I nearly fall asleep, and then a hot stone massage of the feet and calves, during which I absolutely fall asleep. A mask of menthol and algae (sports algae) is applied to the area, which is then gently wrapped in hot towels, and you get to kind of sit there for a while and relax and really take in how problematic Cops is from today’s perspective. Chilling out in the treatment room is the objective. “Women’s salons get them in and out,” Mia says, “but we want men to get used to this process, to take their time and keep coming back.”

Mia removes the hot towels, leaves me to myself to dry off and put my socks and shoes back on, and I’ll be damned: my feet are soft. Like, angel soft. Like, is it weird how much I’m touching them right now soft. Like, why didn’t I do this sooner soft.

“I’ll be honest, man, guys are coming in and their feet are bad,” Meyers says. “Guys have been told that taking care of yourself less is somehow more masculine, which is a backwards way of thinking.” Mia backs that up: “There is that machismo factor, and the idea that these things are just for females. But kings got pedicures. Once guys realize that a pedicure should be treated like a haircut, it clicks: it’s good for self-esteem, it’s like reupholstering old furniture.” And I agree, though I can’t help but notice we’re having this conversation behind a thick wooden door, so that nobody on the street can look inside and see a man getting a pedicure.

And that’s the kicker (like soccer, a popular sport). After I settled up— $80, plus tip—it hit me like the bright and undulled-by-morning-whiskey noontime sunshine: this was my first pedicure. As prepared as I was to write a piece about how toxic masculinity has robbed generations of insecure males of the simple but sublime pleasure of a pedicure, the truth is that I’m one of those insecure males. Even a guy like me, who thinks of himself as halfway evolved, is actually only halfway evolved.

But this is how we move forward. Baby steps. On gorgeous feet.