Home Sport DeChambeau on PGA return: ‘Everyone will say I’m coming back too quick’ 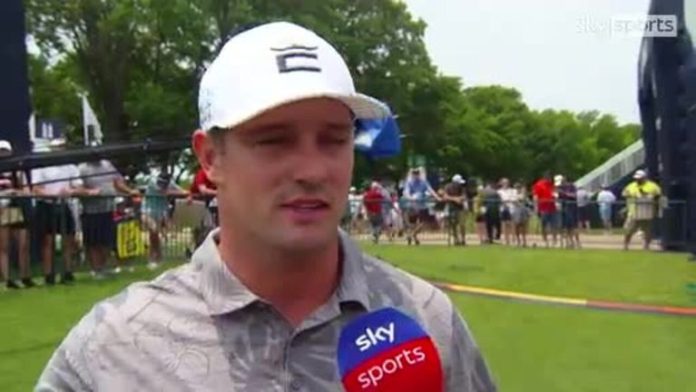 DeChambeau limited to six worldwide starts this year due to wrist and hip injuries; 2020 US Open champion hoping to recover from wrist surgery and compete for the first time since The Masters – watch the PGA Championship throughout the week live on Sky Sports Golf

By Jamie Weir and Ali Stafford

Bryson DeChambeau believes he can overcome injury to challenge for major victory at the PGA Championship, although insists he will not compete if he doesn’t feel able to.

DeChambeau was expected to miss the second men’s major of the year after undergoing wrist surgery last month, having suffered an injury-plagued start to the year, with the former US Open champion saying at the time he hoped to be back competing “within the next two months”.

The 28-year-old remained listed in the field for Southern Hills and fuelled speculation about a quicker-than-expected return when he posted a full-driver-swing video to his Twitter account over the weekend, showing 192 miles per hour ball speed and a 342-yard carry.

DeChambeau tweeted on Monday that he was on his way to Tulsa to test if he was ready to compete this week, with the eight-time PGA Tour winner prepared to make a last-minute decision on his appearance.

“Everybody is going to say I’m coming back too quick,” DeChambeau told Sky Sports News. “For me, this is more of like a prep to see if I can do it. If not, I’m going to take as much time as I need to get healthy, because that’s the most important thing.

“For me, it’s great to see everyone back out here again. It’s tough being at home, just stuck in the dungeon and not being able to do anything. I’m just blessed to be out there, I have a different perspective on golf and life right now.

“Learned a lot over this past year of having a hand that’s just not been right for me, so I’m glad it’s in the healing process. I can’t really do much more damage do it, because the bone is now out, but I’m just excited to be back out and seeing some smiling faces.”

DeChambeau has been limited to six starts this season, missing the cut in three of them and withdrawing mid-tournament from the Saudi International, resulting in the 2020 US Open champion dropping outside of the world’s top 20 for the first time since the summer of 2018.

The American has been grouped alongside Max Homa and England’s Tyrrell Hatton for the first two rounds in Oklahoma, with DeChambeau adamant he is still capable of winning the Wanamaker Trophy this week.

“I can’t even swing to a full 100 per cent. Today [Monday] I got close to like 188 ball speed and all that’s that I’m willing to go. I’ve got more in the tank and I can go 200 no problem, it’s just more that I don’t want to put the force into it because it doesn’t have the endurance or the strength yet.”

Will DeChambeau return at the PGA Championship? Watch throughout the week live on Sky Sports. Live coverage begins on Thursday from 1pm on Sky Sports Golf.