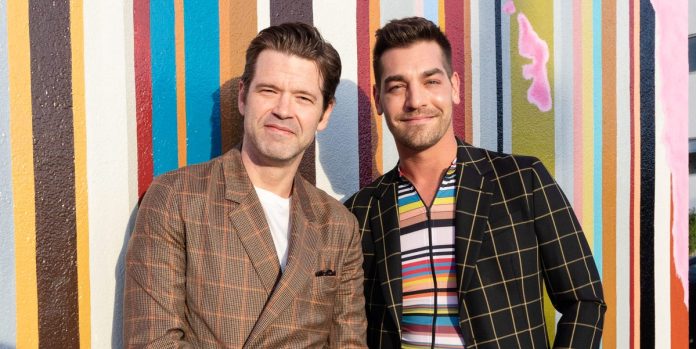 Paul Smith and Esquire teamed up on May 5, 2022 at an exclusive retail event in Los Angeles. The soirée was hosted by Esquire editor-in-chief Michael Sebastian and multi-hyphenate actor and comedian Matt Rogers (Las Culturistas, Fire Island) at the Paul Smith flagship on Melrose Avenue, where the boutique’s iconic pink wall was painted with a with a dazzling trompe l’œil effect featuring the Signature Stripe motif.

The event attracted a number of LA notables, including actor Sam Richardson and co-creator and star of Hacks Paul W. Downs. Other celebrities included Nick Viall (The Viall Files, The Bachelor), Mason Gooding (Booksmart, Love, Victor), and rapper DUCKWRTH, along with popular influencers Rob Anderson and Nick Lehmann. Attendees purchased a number of Paul Smith pieces throughout the evening while enjoying cocktails, hors d’œuvres, and music provided by DJ talent Alex Chapman. Guests also mingled and posed for photography captured by Cobrasnake, while VIPs and friends of Matt Rogers were styled in Paul Smith with suave ensembles that featured crisp variations of the Signature Stripe.

Before the party, we caught up with Matt Rogers and discussed his upcoming projects, along with his relationship with style, Paul Smith, and how he is maintaining Gwyneth Paltrow’s work-life balance. Read our interview below, and keep scrolling for an inside look at the party.

Esquire: I saw a great headline the other day, that you hope Fire Island becomes a franchise on the scale of Fast and Furious for queer people. What do you love about this project so much?

Matt Rogers: For me, it was the people. The cast, and how we all became a family, in the truest sense of the word. Which is to say, a family in sort of a Fast and Furious cast sense. You really feel like they have big pasta dinners together. I bet they’ve all gone out to, like, laser tag. Family stuff. I literally wouldn’t mind doing four of five films with this same ensemble. As we were wrapping, I even thought to myself, “what can I write that we can utilize this same cast for?” And that doesn’t always happen! But at the end of a 6 week shoot in Fire Island, in close physical and emotional proximity, we didn’t want to kill each other. We could have kept going. That’s something!

Tell me a little bit about what the energy was like on set.

It was meta. A lot of us had just been on vacation together on that very island weeks before. So there we were sort of… repeating and portraying that experience for what we anticipate is going to be quite a few queers. So we were all really excited to be a part of it because the script is terrific and we get to be in this iconic place shooting it, and we knew there hadn’t been anything like it before. Thematically, things definitely boiled over from the film into real life. There were horny little crushes. There were little dramas. There was, throughout, a really strong sisterhood. I think when people watch the movie they’ll see that we all really care about each other and it was a passion project for everyone. I hope people can feel that.

I Love That For You also just began airing. Congrats! Tell me about getting involved with that project.

I had become friends with Vanessa Bayer when we shot an episode of Shrill together where I played her publicist, and I knew that she had this show she was working on with Jeremy Beiler. I got the audition and I think my first thought was, “okay, let’s not fuck this up and look stupid in front of my new friend Vanessa.” I wasn’t even thinking I’d book the role, honestly. I was in that place of rejection after rejection after rejection and feeling really bad about how my auditions were going, actually. So it was more a thing of “let me not mess up” than “let me show them I am the only one for this.” And maybe the fact that I kind of went in there and threw it away in the audition and just tried to relax and seem cooler about it all than I was worked to my benefit in booking Darcy, who’s very dry and unbothered and officious, at least in the pilot. Vanessa and I also improvise together really well, so it just felt like a great energy. And then Covid happened and literally ten months went by before I heard I got it. And it’s been fun as hell ever since. I kind of can’t believe my luck.

How do you approach debut/premiere day for a new film or show? Are you up all night reading reviews and trolling the comments section on socials, or do you logoff to block it out?

I have tried to learn my lesson with reading reviews or feedback from social media, but I’m not perfect with that and I am interested to hear what people are enjoying or thinking about these things I put so much of my time and energy and creativity into. For better or worse. Like, I want to say I draw a bath and read a book and meditate when I know something of mine is coming out. I don’t. I’m not like Gwyneth Paltrow who does a job, clocks out and forgets she was in the movie entirely. I would like my work-life balance to be more like Gwyneth. I’ll get there.

We’re excited you’re here at this event with us. How did your relationship with Paul Smith begin?

What I love about Paul Smith is that there is a vibrance and an embracing of color that you don’t see everywhere in menswear. I actually wear a ton of Paul Smith in I Love That For You, and I think what I really came to realize while shooting is that I instantly felt good and happy and comfortable in these suits. Because the clothes themselves have personality, they bring out your own. So, I wore a lilac Paul Smith suit to the I Love That For You premiere because it represented the show’s sense of fun and brightness and also mirrored how I felt about being a part of all of it. Don’t get me wrong, every now and then I love a stoic moment. But there’s a joy in these clothes and an opportunity to stand out. I love it, and I really appreciate the creativity.

You have a really well developed sense of personal style. How would you describe how you approach clothes, and how has that approached changed over time?

I think like a lot of gay men my age, I used to hide when I was dressing myself. Growing up, I kind of wanted to blend in and look like everyone else. So I wore a lot of the same fast fashion I saw elsewhere. Since becoming more comfortable with myself, I’m way more comfortable taking risks. I’ll wear a bold pattern. You’ll see me in a color. I now actually think about how my shoes are speaking to the rest of my outfit. As an actor, I actually think how you’re dressed is one of the most important parts of creating and expressing character, and that’s bled over into my real life. It’s less, “what’s in fashion or what do I think will be the norm at this event” and more, “what am I feeling today and how do I want to get that across?” Life is too short not to be having fun. That’s why tonight I’m wearing a bicycle shirt under my suit. Why not? You live once. Wear the bicycle shirt.