Home Sport Junior WRC Embarks Upon The First Gravel Round Of The Season In... 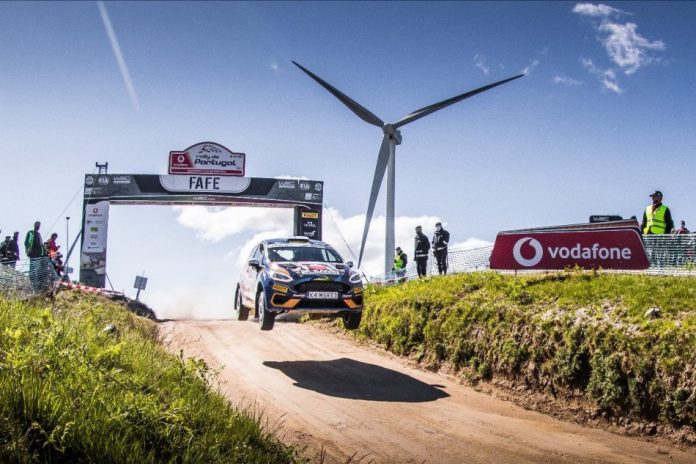 The 2022 FIA Junior WRC Championship is set to pass its halfway marker on the rough and tough Rallye de Portugal with a tantalising championship fight taking place that sees Lauri Joona and Jon Armstrong tied at the top.

Portugal marks the first of three gravel outings for Junior WRC in 2022 as the field of future WRC stars prepare for the sport’s more traditional surface type. The championship has already visited on the snow and ice of Rally Sweden which saw Armstrong claim the opening victory of 2022. Round two headed to the slippery asphalt of Croatia in which Lauri Joona claimed his maiden Junior WRC victory.

Equipped with identical EcoBoost-powered M-Sport Poland Fiesta Rally3 cars, exclusively fitted with Pirelli Scorpion tyres and using tailor made Wolf Lubricants, the rival crews will all be vying for the first gravel victory of 2022.

While road position won’t be a factor that will affect Junior WRC crews too much, pace and strategy will be the key to winning the rally. Winning Rally de Portugal relies on a balanced approach between outright pace and seeing the finish line of every stage.

The temptation to push hard will be even more present for Junior WRC crews thanks to the possibility of Wolf Stage Win Points available on every stage of the rally which can change a crew’s championship fortunes. With three super-special-stages on this year’s edition of Rally de Portugal comes three unique opportunities to deploy clever tyre and setup strategies to snatch low-risk but highly sought-after championship points.

Following an educational couple of rounds so far this season, McRae Kimathi has opted to recruit the experienced hands of Stuart Loudon to co-drive for him for Portugal. Mwangi Kioni will still be present on the event and following Kimathi as the move has been made for both driver and co-driver to learn and draw from Loudon’s broad WRC experience.

Following a podium performance on Croatia Rally, Jean-Baptiste Franceschi has decided to withdraw from the championship with immediate effect. The 2021 ERC Junior Champion has decided to forfeit the remainder of his Junior WRC prize drives due to feeling too underprepared for the level of competition required in Junior WRC.

Maciej Woda, FIA Junior WRC Championship Manager, said: “It’s an exciting moment for the championship as we are now heading to rallying’s most popular and exciting surface. While we want to ensure Junior WRC competes on every surface available on the WRC calendar, it’s vital that we also deliver a variety of gravel surfaces too. Portugal represents the rough and more extreme types of gravel available in WRC and require 100% focus and attention to detail in the stages. Conditions tend to develop rapidly from recce to the first competitive pass for Junior WRC cars so crews have to balancing showing care, without losing too much time. We have an old face returning for Portugal too with Stuart Loudon joining McRae and Mwangi to help them develop their skills in WRC, it’s a very mature and wise move from McRae and I am sure him and Mwangi will learn a lot. I am also very disappointed to confirm that J-B Franceschi will not be continuing in the championship. J-B is a very talented and capable driver, he has proved this multiple times but if he doesn’t feel prepared for Junior WRC then we have to respect his decision.”

65 Jon Armstrong / Brian Hoy
“Portugal is one of those events where you probably have to try and survive more than raw pace. Of course, if you don’t push you’ll get left behind quite a bit as well. I think it’s just a matter of trying to see how the first couple of stages go, try to get through them and take it from there.”

66 Sami Pajari / Enni Malkonen
“You should be really clever on this rally; you need to really choose the places where you are pushing and where you being careful. Let’s see how it goes, for sure in Junior WRC you need to be going flat out if you want to have a chance at winning which is not going to be easy.”

67 Lauri Joona / Mikael Korhonen
“I am feeling good but also a little bit scared because the last time we were here we retired twice. Still, I need to go into this event with a clear and happy mindset as it is a nice rally.”

68 William Creighton / Liam Regan
“Any event you’ve done before, it helps a lot to have that experience, but the event is very long, and it is a bit of a marathon. The stages can get quite rough, and there is a lot to take in but at the same time on an event like this you need a bit of luck as well.”

70 Robert Virves / Aleks Lesk
“We are aiming for the best result possible in Portugal, I haven’t done any kilometres of testing on gravel with the car yet so it is not going to be easy but let’s see.”

72 Mcrae Kimathi / Stuart Loudon
“I just really thought about things and I thought we both needed to learn from somebody who can help us to understand more about what European rallies are all about. It’s just a one-time move as a kind of benchmarking tool to help both of us. I picked Stuart because he’s competed in Kenya with Onkar Rai and he also understands these types of rallies. It’s just to help me get to this level that the other Junior WRC drivers are at, to get to that benchmark level.”