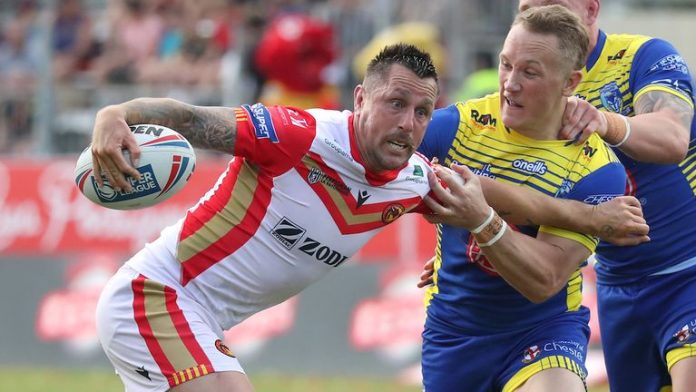 We look at what is being said and team news ahead of the local rivalry match up between the Warrington Wolves and St Helens.

Separated by just nine miles, the Warrington Wolves and St Helens have established a rivalry that always brings an exciting encounter in Super League and Thursday’s match should be no different.

In what could be a crucial match for the Wolves side, they will be without Joshua Charnley and Danny Walker on Thursday evening as they look to back bounce from a heavy defeat to the Catalans Dragons.

However, they will be strengthened by the return of Gareth Widdop who had missed three matches for Warrington with a glute injury, but looks set to return to face the current league leaders.

The clash will also see brothers Peter Mata’utia and Sione Mata’utia face off against one another and it is a match-up that the Warrington centre relishes, even if their mother does not.

“I don’t like him that much this week. But it’s great to have him over here,” said Peter Mata’utia.

“He’s still young and he’s in a great system. I love seeing him happy.

“My mum hates how we play against each other, but I’ve always said to him whoever is on the opposite side of the field is my friend.

“They’re just an enjoyable team to play against; they’re tough, they’re very challenging and they push you for 80 minutes, so I’m looking forward to it.”

Although it was thought that he was close to returning, St Helens remain without Regan Grace who is still recovering from a hamstring injury.

St Helens head coach Kristian Woolf has made only one change to the side that beat Hull FC last week, Daniel Hill coming into the squad to replace Jumah Sambou and he knows that, despite their recent run of poor form, Warrington remain a dangerous side to come up against.

“I see a side that is dangerous,” said Woolf.

“I think if you looked at the squads and the players available at the start of the year and the squad that they have named, everyone would have said they would be a team that is going to place in the top four or five and be a very dangerous side.

“So, that doesn’t change. Players don’t lose their talent.

“They obviously haven’t had the results go their way and they have lacked a bit of confidence at times but they are still a dangerous side.

“When you lose a game like they have on the weekend, you generally want to make amends for it the following week and I have got no doubt that a big game against us, it is a local rivalry, it is a home game for them, it is going to be one that they are going to put a lot of energy into and that is certainly the game that we are going to be prepared for.

Russians are ‘worn down’ in Lysychansk, intelligence expert says