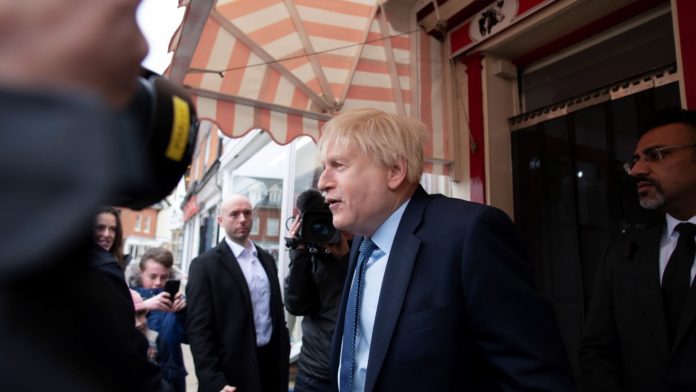 A new teaser video has been released of Sky’s new drama series about Prime Minister Boris Johnson’s handling of the COVID pandemic.

Sky has shared a clip of Sir Kenneth Branagh as Mr Johnson in This England, which is due to air later this year.

The drama series will follow the prime minister as he deals with the COVID pandemic, Brexit and also controversy within his personal and political life.

The teaser starts with a positive voiceover by Sir Kenneth as the PM saying: “2020 will be a year of prosperity.”

But a montage of clips showing the inside of Number 10 then follows as the COVID pandemic appears to escalate.

An eerie soundtrack plays as the rhetoric to “wash your hands” and “stay at home” plays out alongside images of Mr Johnson hosting press conferences at Downing Street.

It closes with an image of the Number 10 door shutting as a radio announcer states: “The United Kingdom has overtaken Italy to report the highest official death toll.”

Originally titled This Sceptred Isle, the series will explore the impact that the pandemic has had on the UK, and the response of scientists, nurses and doctors.

It is based on the first-hand testimony of people inside Number 10 Downing Street, as well as the Department of Health, the Scientific Advisory Group for Emergencies (Sage), and from hospitals and care homes across the country.

Newly released images also show Ophelia Lovibond, who is also known for her roles in BBC sitcom W1A and Guardians Of The Galaxy, portraying the prime minister’s wife Carrie Symonds.

The series will be directed by Michael Winterbottom, who will also co-write, while Tim Shipman, the political editor of the Sunday Times, will act as a consultant.