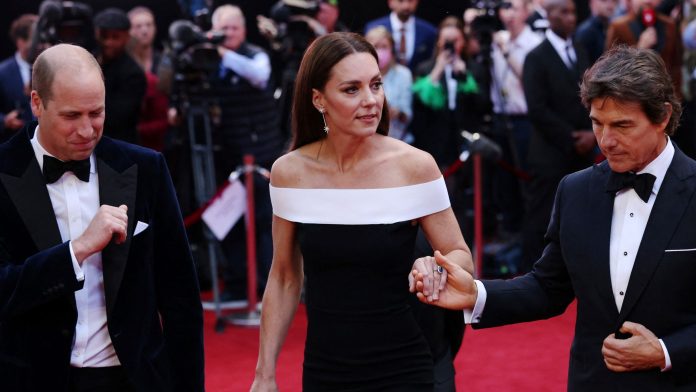 The Duke and Duchess of Cambridge have made a glamorous appearance alongside Tom Cruise at the UK premiere of the long-awaited Top Gun sequel.

The Hollywood legend introduced Prince William and Kate to the cast as a model jet loomed over the red carpet in Leicester Square.

Cruise, 59, reprises his role as hot-shot Navy lieutenant Maverick more than 30 years after the iconic original.

The actor told reporters he and the duke shared some key interests: “We have a lot in common. We both love England, and we’re both aviators, we both love flying,” he said.

Cruise said he was delighted to be back on the red carpet: “I love what I do, I’ve always enjoyed it and I’m enjoying it even more now.

“Particularly after the last couple of years, just to have an event like this is extraordinary.”

More on Duchess Of Cambridge

He also talked glowingly about the Queen’s “beautiful” jubilee event in Windsor a few days ago, in which he appeared.

“I think I’ve adopted you [the UK]… I’ve been making movies here for 40 years. I love this country,” he told Sky News.

Cruise made a more subtle entrance to the premiere compared with the US debut earlier this month, when he landed a helicopter on an aircraft carrier in San Diego.

It was initially due for release in July 2019 but was repeatedly pushed back because of the pandemic.

Kate and William’s appearance at the premiere is the latest in a long line of royals stepping out for big London film showcases.

Initially called the royal command film performance, the first was in 1946 when the Queen and her family went to Leicester Square for A Matter Of Life And Death, starring David Niven.

Top Gun: Maverick is released in the UK and Ireland on 27 May.

F1 – Sainz claims first career pole at Silverstone ahead of...

Selena Gomez shines in the return of ‘Only Murders in the...