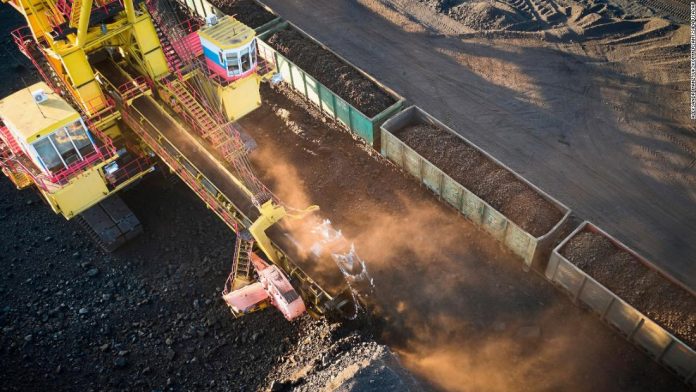 In April, not only did the world’s second largest economy buy more coal from Russia than ever before, it also eliminated import tariffs on all types of coal, a move analysts say will mainly benefit Russian suppliers.
China’s coal imports from Russia nearly doubled between March and April, reaching 4.42 million metric tons, according to trade data from Refinitiv. Russia has overtaken Australia as China’s second biggest supplier since last year and now accounts for 19% of its coal imports, up from the 14% share it had in March.
The booming coal trade boosts both sides. Despite bold pledges to tackle the climate crisis, China is now focused on getting its economy out of a slump and needs coal to fuel power stations and make steel for infrastructure projects. Russia desperately needs new customers for its fossil fuels as they are shunned by the West.
China, the world’s top buyer of coal, promised in 2020 to go carbon neutral by 2060. But after severe power shortages hit millions of households and businesses late last year, it ramped up its consumption of coal.
Coal imports soared 64% in 2021, and domestic output hit a record 4.13 billion metric tons. This year, these numbers are expected to be even higher as President Xi Jinping prioritizes infrastructure investments to revive the economy.
Last month, China imported a record 1.09 million metric tons of seaborne coking coal from Russia, up 10% on April last year, according to Matthew Boyle, lead dry bulk analyst at data firm Kpler. Coking coal is used to make steel.

First, there was a dip

Coal trade between China and Russia declined shortly after Moscow invaded Ukraine in February and Western countries started hitting Russia with unprecedented sanctions. Chinese banks were initially reluctant to provide financing for purchases of Russian commodities, according to Reuters.
“After Russia started the assault, Chinese and many other buyers initially scaled back purchases to assess the risk of secondary sanctions,” said Lauri Myllyvirta, lead analyst at Centre for Research on Energy and Clean Air, a Helsinki-based think tank.
By March, that reluctance had evaporated.
“When it became clear that the EU wasn’t moving fast to ban imports, and that effectively prevented both the US and the EU from imposing broader sanctions that would affect other buyers, there was a jump in purchases resulting from latent demand,” Myllyvirta said.
The European Union has since approved a ban on Russian coal, which is set to take full effect from August. Earlier this month, it also proposed to ban all Russian oil imports within six months.

China is not only buying a lot of Russian coal now — it is also buying it at a big discount.
Russia is the world’s third largest coal exporter and global prices of the commodity have surged since it invaded Ukraine. The price of ICE Newcastle coal futures have risen more than 40% since the start of March.
“In recent months, sanctions have created a stark bifurcation of the global seaborne coal market, as many importers are now unable or unwilling to import coal from Russia,” said Toby Hassall, lead analyst for Coal Market Research at London Stock Exchange Group.
As the pool of buyers gets smaller, those importers who are able and willing to buy coal from Russia are “paying much lower prices for this supply compared with coal sourced from other origins,” Hassall said.
In April, premium Russian coking coal delivered to Jingtang port in northern China was priced at 2,710 yuan ($403) per metric ton, according to Chinese industry data provider MySteel. That compared with $475 for US coking coal reaching the port, and $423 for coal mined in China.
The price discounts have persisted this month.
By late last week, Russian coking coal at northern China ports averaged about $439 per metric ton, according to Hangzhou-based data provider Hithink Flush Information. Australian coal cost $512, and Chinese coal $496.
To Beijing, buying more from Russia is not only a friendly gesture to Moscow, but also a smart move that benefits China’s own economic needs.
“So far, the government seems to be walking a line of maintaining friendly relationships with Russia without encouraging or directing Chinese firms to increase business with the country, and discouraging anything that might run afoul of the sanctions imposed on China,” Myllyvirta said.
“This line does mean that China’s imports from Russia are likely to grow simply on market basis, as other buyers move to embargo Russian fossil fuels,” he said.

Why does China need so much coal

Despite the pledges to cut its dependence on fossil fuels, China still needs coal to power its economy. As much as 60% of China’s electricity output was generated from thermal coal in 2021, while more than 90% of Chinese steel was produced in blast furnaces that burn coking coal. In general, coal made up 56% of China’s total energy use as of last year, according to the National Bureau of Statistics.
“The Chinese government is currently pushing for all kinds of infrastructure and construction projects, which includes coal industry projects, to offset the effect of the real estate slump and Covid lockdowns on other parts of the economy,” said Myllyvirta.
China has been trying to boost coal production since last year, when a severe power crisis triggered blackouts for millions of households and forced many factories to cut production.
On Thursday, Premier Li Keqiang said that a steady supply of power is critical for China’s growth goals.
China will “resolutely” prevent any power crunch from happening again this year, Li said during a visit to a power transmission center in Yunnan province, China.
The National Energy Administration has set Chinese mines a target of 4.4 billion tons this year, up 300 million on last year’s record output.
And in another effort to guarantee supply, the government cut all import tariffs on coal to zero between May 1 this year and March 30, 2023. Previously, tariffs ranged from 3% to 6%, depending on the type of coal.
Indonesia, China’s current No.1 supplier, has enjoyed zero tariffs for years thanks to a free trade pact between China and ASEAN nations. But Russia was still subject to tariffs until this month.
“We estimate a 30% increase in [Russia’s] export volume to China to 71 million tonnes this year vs. 55 million tonnes in 2021,” Morgan Stanley analysts said in a research note last month.
A new bridge between China and Russia might help with that. The first railway bridge linking the two countries was completed last month. The 2,215-meter-long bridge will be mainly used to transport coal, iron ore, and other goods from Russia to China, according to Chinese state media.