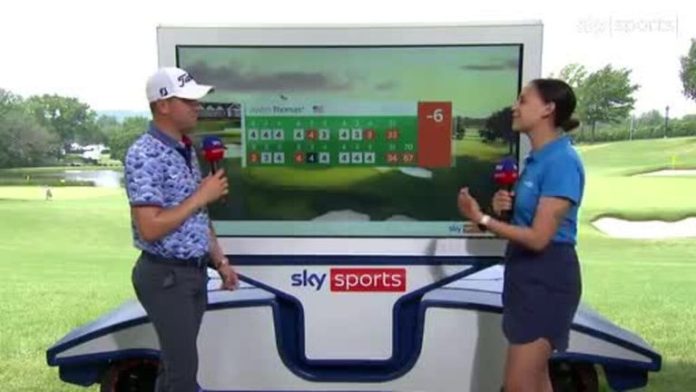 Thomas mixed four birdies with a lone bogey to post a second successive 67 and move one ahead of overnight leader Rory McIlroy; Masters champion Scottie Scheffler set to miss the cut as world No 3 Collin Morikawa also struggles

Justin Thomas refused to get carried away about the possibility of ending his major drought at the PGA Championship, despite setting the clubhouse target in testing conditions on day two.

Thomas, whose sole major victory came when he won the Wanamaker Trophy at Quail Hollow in 2017, carded a second consecutive three-under 67 – in winds gusting up to 40mph – to move to six under and a shot ahead of overnight leader Rory McIlroy.

The former world No 1 started Friday two shots off the pace but quickly pulled level with McIlroy – one of the afternoon starters – when he birdied two of his opening four holes, only to fail to get up and down from a greenside bunker to save par at the par-three 14th.

Thomas ended a run of pars with a brilliant 25-foot birdie at the fifth and added another from ten feet on his final hole to regain the solo advantage, with this week’s event the first time the American has ever started a major with back-to-back rounds of 67 or better.

“(I’m) very pleased,” Thomas told reporters after his round. “Although I played solid yesterday, I played really, really well today. The conditions were obviously very difficult.

“I stayed very patient, tried to get in my own little world and get in a zone and just tried to execute each shot the best I could. I felt we did a great job of that and am glad to have a good round to show for it.

“We’re halfway through so it’s still a long way from home, but I’m very, very pleased with where everything is at and the frame of mind and state of mind that I’m in. I just need to try to maintain that the best that I can and keep trying to play good golf.”

Matt Fitzpatrick sits three behind Thomas after a brilliant second-round 69, while Shane Lowry also briefly got within three of the lead until dropping four shots over his closing eight holes to settle for a two-over 72.

World No 1 Scottie Scheffler’s sensational start to the year ended abruptly after a nightmare finish to his second round saw him miss the cut.

Scheffler came into the week as the pre-tournament favourite after registering four wins in his last seven PGA Tour starts, including a maiden major success at The Masters last month, although failed to progress through to the weekend at Southern Hills.

The 25-year-old posted a one-over 71 on day one and looked well placed to move up the leaderboard when he opened his second round with nine consecutive pars, only for things to quickly unravel after reaching the turn in windy conditions.

Scheffler responded to back-to-back bogeys from the second by making a close-range birdie at the fourth, before continuing his slide down the leaderboard when he failed to get up and down from a greenside bunker at the next.

A dropped shot at the seventh left him on the projected cut mark of four over, while a three-putt double bogey from 15 feet at the par-four ninth – his final hole – saw him close a five-over 75 and left him facing a first missed cut since his opening start of the season last October.

Two-time major winner Collin Morikawa also suffered a disappointing finish, bogeying his final two holes to card a second successive 72, with world No 2 Jon Rahm the only one of the marquee group to finish under par as he signed for a one-under 69.