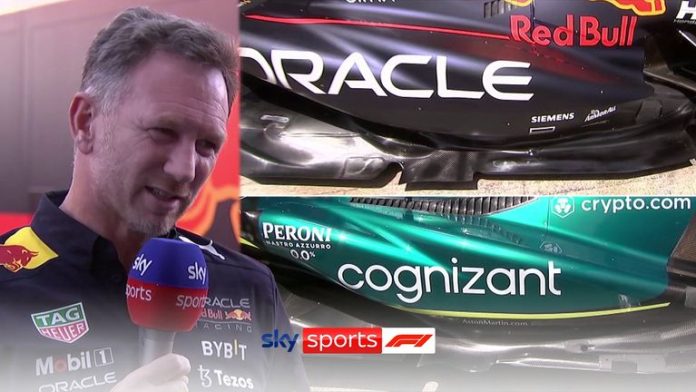 Red Bull boss tells Sky Sports an internal investigation will take place to check whether there may have been a “criminal offence” transfer of intellectual property; Aston Martin have denied claims of copycat Red Bull car and FIA cleared them of wrongdoing in pre-race investigation

Christian Horner has confirmed Red Bull will conduct an internal investigation to check whether Aston Martin have copied their F1 car, and says any transfer of intellectual property would be “totally unacceptable” and a “criminal offence.”

Aston Martin debuted a raft of upgrades for their AMR22 on Friday at the Spanish GP, but the car has drawn comparisons to the front-running Red Bull due to its strikingly similar concept.

The FIA said they had completed a pre-race legality check of the car and absolved Aston Martin of wrongdoing, although Red Bull – having lost many members of staff to the team including head of aerodynamics Dan Fallows – are still suspicious, as off-track controversy rumbles on in Barcelona.

“Imitation is the biggest form of flattery at the end of the day,” Red Bull team principal Horner told Sky Sports F1. “And it’s no coincidence we’ve had a few individuals who have transferred from Red Bull to Aston Martin over the winter and the early part of this season.

“It was actually brought to our attention by the FIA earlier in the week when they said, ‘We’ve got a car which looks remarkably like yours, can we have a list of your leavers to see where they went?’.

Fallows has joined Aston Martin as technical director after a period of gardening leave, while Andrew Alessi has also left Red Bull and is now Aston’s head of operations.

Horner confirmed Red Bull’s own investigation, while he also called on the FIA to carry out more checks.

“We will have an internal investigation,” he said.

“We’ve got our own software protections, we know exactly where our software is looked at and where it is controlled.

“It’s the job of the regulator, the FIA, because they have the access and we rely very much on them to ensure there is no transfer of IP (intellectual property) and no abuse of that.”

Horner added he was most concerned about the potential transfer of intellectual property, which his team earlier stressed in a statement would be a “serious concern”.

“We see it up and down the paddock individuals move from team to team after a gardening leave period. What individuals take in their head, that’s fair game and is their knowledge.

“What isn’t fair and totally unacceptable is if there has been any transfer of IP.”

Questioned on whether Red Bull had evidence of any wrongdoing, Horner stated: “I’m not going to disclose exactly where we are with certain individuals, but it would be a criminal offence.

“Ideas are a team’s lifeblood, it’s what we invest millions of pounds into and you wouldn’t want to see that just turning up in a rival organisation.”

F1 has strict rules on lookalike cars – focusing on ‘Reverse Engineering’ – which were introduced after Racing Point, Aston Martin’s former guise, were found guilty in 2020 of illegally copying Mercedes 2019 car.

That car was dubbed the ‘Pink Mercedes’, while the AMR22 has been nicknamed a ‘Green Red Bull’. Red Bull were playing up to that on Friday by displaying lime-flavoured green cans of their energy drink for much of the day.

Sky Sports has reached out to Aston Martin for comment on Horner’s latest comments.

The team earlier issued a statement confirming the FIA had cleared their car, while they have insisted they were designing their car long before even seeing Red Bull’s RB18.

Krack called the redesigned AMR22 a “normal development process” and said: “I think there you have to ask Red Bull if they have a problem.

“So from that point of view, we pursue our path, continue developing and try to move up the grid.”

Red Bull are currently second in the standings but have had the fastest car in recent races, while Aston Martin are ninth and only ahead of Williams. The FIA have yet to comment since their earlier statement.