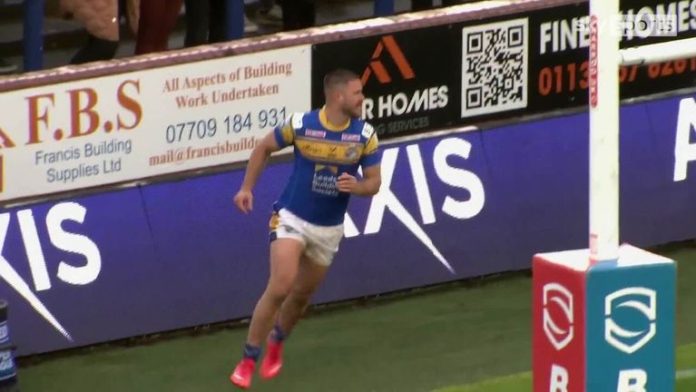 James Bentley grabbed a brace as Leeds beat Wakefield 24-6 at Headingley to give themselves breathing space in Super League’s relegation battle.

Forward Bentley touched down twice in the first half, before being sin-binned, while Blake Austin and David Fusitu’a crossed in the second as the Rhinos handed out-of-form Trinity their seventh loss in a row.

Rhyse Martin kicked four from five with the boot in what was new coach Rohan Smith’s first victory since taking charge.

Leeds named Zak Hardaker at fullback, with Jack Broadbent left out of the squad, while there was also a return for Fusitu’a on the wing and a recall for Bentley in the second-row.

For Wakefield Thomas Minns was selected on the wing, with Liam Kay moved to the bench, and James Batchelor was at loose forward at the expense of Tinirau Arona.

Trinity looked to have drawn first blood when Tom Lineham dived over in the sixth minute, but the try was ruled out for a forward pass.

The Rhinos broke the deadlock when Bentley crossed off an Austin pass in the 10th minute, before Martin’s conversion made it 6-0.

Bentley scored again 16 minutes later, breaking through the defence after taking another pass from stand-off Austin.

Martin made no mistake with his kick from nearly in front to take the lead to 12-0 and put Leeds in a commanding position.

But Bentley turned from hero to villain when he was given a yellow card after a high tackle on Thomas Minns.

The extra-man advantage was exactly what Wakefield needed, and four minutes later Jai Whitbread brushed past some weak tackling to score.

Mason Lino’s conversion cut the deficit to 12-6 and suddenly put Trinity back in the contest.

The Rhinos started the second half strongly when they dragged front-rower Rob Butler back into the in-goal area and forced a drop-out, and in the 55th minute Martin edged Leeds further ahead with a penalty goal.

Wakefield pushed for a response but again their hands let them down as they made regular errors and could not build any pressure.

Tempers were raised with 18 minutes left when Austin was penalised for a lifting tackle on Kay.

However, the Rhinos’ defence would not yield as they scrambled hard to keep the winger out when he leapt high in the corner for Lino’s kick.

Leeds moved further ahead with 12 minutes left when Austin barged his way through several defenders to score his team’s third try.

Martin added the extras and Fusitu’a dived over in the 78th minute to put the seal on the victory.