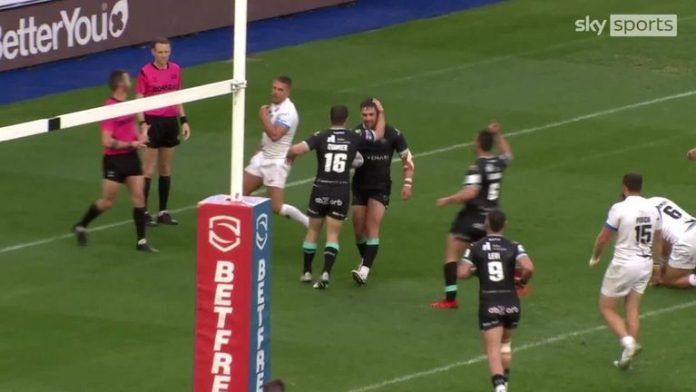 A week out from the Challenge Cup final, the Giants trailed for most of the game and were 16-6 down when Matty Russell scored Toulouse’s third try five minutes into the second half.

However, two tries from winger Innes Senior helped spare Huddersfield’s blushes and break the hearts of the visiting French side.

“It was a big one for Jack,” Giants head coach Ian Watson said. “He likes to practice them in training and they don’t always go over.

“The main thing was getting a result but we were really sloppy in the first half. We were a different team in the second half but, if we want to be a top team, we can’t drop off the week before a cup final. We will learn a lot of lessons from this.

“Maybe we had our minds on next week. That’s always the worry when you’ve not been to a cup final before. They all want to get through this game.

“But I don’t want to take anything away from Toulouse. I thought they were really good, especially in the first half.

“Corey Norman has added to them and he will be a massive plus for them going forward.”

It was a less than impressive performance from Watson’s team and they were handed an injury scare ahead of next Saturday’s showdown with Wigan at the Tottenham Hotspur Stadium when half-back Oliver Russell was forced out of the action after 21 minutes.

Huddersfield were lacking only scrum-half Theo Fages and second rower Chris McQueen from their likely cup final team, although Cogger, who was back from a three-match suspension, could get his chance next week if Russell is ruled out.

The French side made a poor start with Lucas Albert putting the kick-off out on the full and repeating the error following Huddersfield’s first-half try, but Toulouse’s tactical kicking was generally impressive as they kept their hosts pinned inside their own half for long periods of the first half.

They went in front after six minutes when Albert’s grubber kick deceived Tui Lolohea and enabled former Huddersfield full-back Olly Ashall-Bott to touch down for the game’s first try, which Chris Hankinson goaled.

The French side, buoyed by a big win over Wakefield, regained the lead midway through the first half when prop Romain Navarette went through a gap in the Huddersfield line and held off his pursuers on a 40-metre gallop for a remarkable solo try, which Hankinson goaled for a 12-6 lead.

The loss of Russell forced a re-shuffle in the Huddersfield back division, with Ashton Golding going to full-back and Lolohea moving into the halves, but their problems in defence continued at the start of the second half as Russell cut inside from the wing to catch them wrong-footed and scoot over for a try.

That made it 16-6 but the Giants eventually managed to retain possession long enough to put their opponents under sustained pressure.

A 40-20 kick from Cogger gave his side a perfect attacking platform and busy hooker Danny Levi was held up over the line while both Joe Greenwood and Luke Yates were tackled just short.

The pressure eventually told when centre Ricky Leutele produced a sweet pass for Senior to go over for his first try and Lolohea’s touchline conversion cut the deficit to four points.

Toulouse looked to be out on their feet in the final quarter and it was no surprise when Senior scored his second try, this time courtesy of a pass from Golding, to level the scores eight minutes from the end.

Lolohea was wide with the conversion attempt but Huddersfield went in front for the first time five minutes later with a drop goal from Cogger and hung on for an eighth victory of the season.