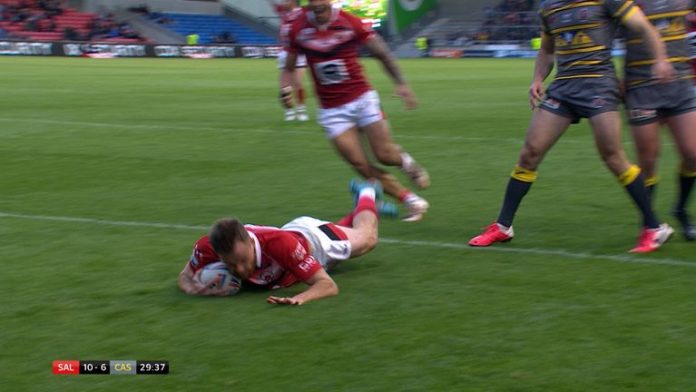 Joe Burgess scored a hat-trick as Salford Red Devils completed a Super League double over Castleford Tigers with a 30-14 victory at the AJ Bell Stadium.

The former Wigan winger scored twice in the first half then added a third with 10 minutes remaining as Paul Rowley’s men made it back-to-back wins.

Castleford winger Jason Qareqare got a brace in reply but it was not enough for Lee Radford’s side, who finished the game with 12 men following a yellow card for Adam Milner, 10 minutes from time.

Salford were forced to make changes to the side which beat Leeds on Sunday. Full-back Ryan Brierley was a late withdrawal with a hamstring injury and was replaced by Morgan Escare, while Sitaleki Akauola came in for the injured King Vuniyayawa.

Liam Watts was missing for the Tigers as he served the first of a two-match ban after a high tackle in the win over Hull KR and Daniel Smith was his replacement.

It was a milestone night for Castleford’s Kenny Edwards and Jake Trueman who were making their 150th and 100th career appearances respectively.

Castleford made the perfect start with a try in the third minute. Jake Trueman and Gareth O’Brien combined well on the left edge and sent Ryan Hampshire in at the corner – but O’Brien was unable to add the conversion.

The home side responded in the 17th minute when Tim Lafai was able to touch down a kick-through by Marc Sneyd for his fourth try of the season, while Sneyd’s conversion edged Salford in front.

An O’Brien penalty – after Salford were spotted offside in front of their own posts – saw the scores tied at 6-6 before a brace from Burgess swung the game decisively in favour of the home side.

His first came after Sneyd and Escare combined, cutting inside to leave the Castleford defence wrong-footed.

The former Wigan winger claimed another, two minutes before the break, producing a stylish finish to race in from 20 metres after taking the pass from Lafai, and Sneyd’s goal extended Salford’s lead.

Castleford made a bright start to the second half and scored their second try in the 48th minute as winger Qareqare found himself in space on the left edge following slick hands between Trueman and Kenny Edwards.

Hampshire took over the kicking duties from the injured Gareth O’Brien, who had to go off 10 minutes earlier with a head injury, but he was off target.

As Salford seemed to be creaking, up stepped Sneyd with a real collectors item – a 20-40 kick which relieved the pressure and gave his side a decent attacking platform.

With Castleford still struggling to get back, they were penalised for offside and Sneyd opted to take the shot at goal, extending Salford’s lead further.

The Red Devils extended their advantage just before the hour mark with a stunning try. Andy Ackers broke dangerously up the middle of the field and he fed Escare, who was heroically hauled down by Hampshire.

Croft and Callum Watkins combined to send Deon Cross in at the corner for a try which Sneyd converted.

Qareqare claimed his second try after a brilliant finish with 18 minutes remaining as the video referee overruled the onfield decision by referee Liam Moore, while Hampshire failed to add the goal.

Castleford were reduced to 12 men moments later as Milner was shown a yellow card for dissent.

Salford quickly capitalised on the extra man advantage with the try which sealed Burgess’ hat-trick – his first for the club.

Burgess finished off in the corner after an amazing flick pass from Lafai which left the fans wanting more, and Sneyd completed the scoring with the conversion.