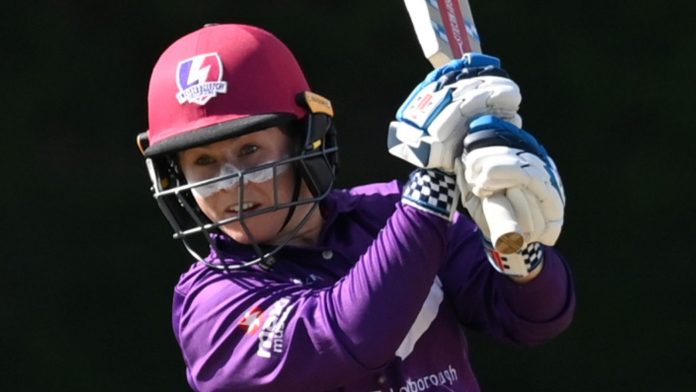 England international Beaumont replicated her 59 from last week with a classy innings after Australian fast bowler Cleary had restricted Thunder to 152 at Leicester – despite Georgie Boyce and Emma Lamb’s 130-run opening stand. SCORECARD

Lightning had lost all six of their fixtures in the competition last year and had already gone down to Southern Vipers and Diamonds this term – but secured victory at the eighth time of asking.

Amy Jones hit a blistering 80 from 49 as Central Sparks maintained their 100 per cent record in Group B with a 24-run win over Sunrisers at Edgbaston. SCORECARD

The England wicketkeeper smashed six fours and six sixes in a dominant knock as the Sparks posted 153-5, with Eve Jones and Abigail Freeborn each contributing 27.

Naomi Dattani led the reply with 51 from 32 balls but impressive spells from Sarah Glenn (2-14), and youngsters Hannah Baker (2-20) and Grace Potts (2-29) saw wickets fall at regular intervals in the second half of the innings as Sunrisers were restricted to 129-8.

Katie Levick’s five-wicket haul proved to be in vain as Southern Vipers made it three wins from three with a 11-run victory over Northern Diamonds in Durham. SCORECARD

Leg-spinner Levick claimed 5-15 as Vipers fell away after a strong start, posting 126 all out despite an impressive 48 from Danni Wyatt.

In response, Bess Heath’s half-century was a lone hand for Diamonds who finished 115-7 in the chase and have now won just one of their three Group A matches.

Cranstone scored 66 not out from 49 balls with six fours and put on an unbeaten 108 for the fourth wicket with Moore, who made 57 not out from 48 balls, including five fours. Claire Nicholas took 2-17.

Georgia Hennessy was the Storm’s top scorer with 50 from 52 balls with six fours. Her opening partner, the England captain Heather Knight, chipped in with 35, while Bryony Smith took 2-22.