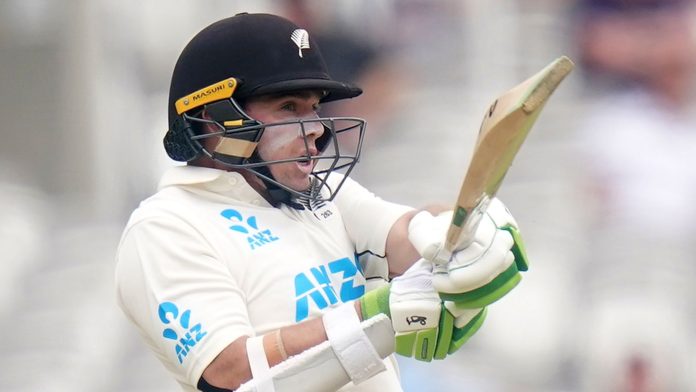 Tom Latham, Will Young, Michael Bracewell and Tom Blundell all hit half-centuries before retiring not out as New Zealand racked up 342-3 on the first day of play in their warm-up match against Sussex at Hove; Ollie Robinson gets through 18 overs on his return from injury and illness

New Zealand’s batters piled on the runs as their tour match against Sussex belatedly got started at Hove.

After day one was washed out on the south coast, the Black Caps racked up 342-3 on day two with four of the top five registering half-centuries before retiring not out.

Captain Tom Latham top scored with 65 while fellow opener Will Young made 55 and the runs continued to flow as Michael Bracewell and Tom Blundell each added 51 in good time.

Meanwhile, having been left out of the England squad for the first Test, Sussex seamer Ollie Robinson got through 18 wicketless overs on his return after injury and illness.

Delray Rawlins was the most successful of the Sussex bowlers, taking 2-63, as he removed Hamish Rutherford (31) and Cam Fletcher (0).

Left-armer Sean Hunt (1-51) took the only other wicket to fall as he had Colin de Grandhomme (26) caught behind.

New Zealand reported no new COVID-19 cases among players and staff, the country’s cricket board (NZC) said before the start of play on Saturday.

New Zealand take on England in the first Test of their three-match series at Lord’s starting June 2, live on Sky Sports.

Brown: I should have retired after Celtic | Why I chose Fleetwood over Scotland

Phoenix extinguish Fire to snatch victory from jaws of defeat