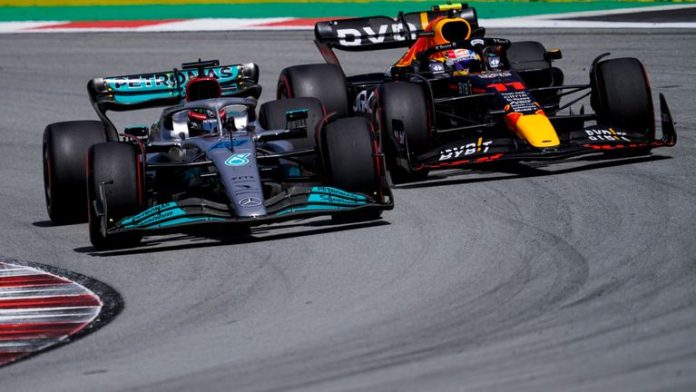 We are surfing on a great wave of F1 racing as far as I’m concerned – even the usually steady Spanish GP delivered four genuine leaders in Charles Leclerc, Max Verstappen, Sergio Perez and George Russell, and a good amount of wheel-to-wheel racing and jeopardy.

We also witnessed some outstanding drives, not least from Lewis Hamilton and Russell in a newly energised Mercedes.

Lewis’ contact with Kevin Magnussen on the opening lap surely cost him a chance of a spectacular result. He was 50 seconds behind the leader on lap two and 54 seconds at the end despite backing off by four seconds on the final tour.

Lewis’s radio call-in after falling to the back of the field with a puncture, basically wanting to stop and ‘save the power unit mileage’, was alarming in that it gave us the true picture of how little he’s been enjoying this season. Presumably 65 laps later he was somewhat more satisfied after showing great pace.

The fans know their stuff as usual in voting him driver of the day.

The most deserving winner of the race was surely Leclerc in his rapid Ferrari. Starting on pole position having delivered a stunning qualifying lap under big pressure after an earlier spin, he delivered the perfect launch from the grid, stayed out of the gravel trap unlike Verstappen and team-mate Carlos Sainz, and was serenely driving to victory with so much time in hand he could pick any tyre strategy, when his power unit failed.

Leclerc’s first non-finish in 16 races, he would also lose the championship lead in which he was 46 points ahead just three races ago. It’s been a rough ride for him while Max has won every race where he’s made it to the chequered flag this year.

Max’s 24th victory, matching the great Fangio, wasn’t his finest, partly due to a malfunctioning DRS rear wing flap, also a trip through the turn 4 gravel when a guest of wind caught him out, and furthermore twice being let through by team-mate Sergio Perez.

Max was clearly angry on the radio at his team when the DRS wouldn’t work, which was hindering his passing of the ever-impressive Russell in the Mercedes. This tells us two things. He’s rather fed up with a catalogue of reliability issues as the team have taken time to finesse and get their new car up to full speed, and down to the weight limit.

Secondly his temper still has a relatively short fuse, as we saw for example in the brake testing of Hamilton in Saudi Arabia last year, which he has otherwise learned to control well in his quest for victories and a first world championship.

It was fascinating to witness his first proper wheel-to-wheel battle with Russell who was defending robustly but fairly, and very well. I happened across the race stewards on Sunday evening and they were of the same opinion that George was pushing the boundaries but not breaking the rules. And his run back past Max between the very short turns one and two will be played out for a good while.

Once again Max was very clean and fair in this enduring battle, more so than when he was against Hamilton last year, which is more fitting of a champion. But of course the championship is not up for grabs yet.

Perez had pitted his Red Bull on lap 37 for brand new mediums, and Verstappen did the same six laps later, which of course is approaching 10% of the race distance although I’m not entirely sure that constitutes a ‘different race strategy’ as Perez was informed when he was told to let him through for the victory.

Perez said he would but that it wasn’t fair, and he had a good point. It was race six of a 22-race season, the team were going to get a 1-2 anyway having dispatched Russell and assuming no safety car interferences or suchlike. Perez was leading because he had been fast and had stayed on the road, and at that stage it could easily be considered normal to protect the cars and hold station for a Perez victory.

While it doesn’t play out well for the team or either driver, if I was on the Red Bull pit wall I’d have done the same and taken the flak. The speed of Leclerc in the Ferrari had been impressive, season-long you’d put your money on Verstappen to take the fight to him most consistently, and as we saw with last year’s championship a seven-point swing between first and second could be critical.

Verstappen’s pace has been prodigious too on the new tyres, and while of course I haven’t read either of their contracts, I wouldn’t be at all surprised if both of those documents provide for such a switch. But Max owes him one.

Interestingly Sergio remains the equivalent of just one race victory away from the lead of the championship, and for that matter Russell is not so far back if Mercedes really do switch on that car now.

Sainz sneaked back past the impressive but overheating Hamilton in the closing stages for fourth. Valtteri Bottas was very impressive for Alfa Romeo once again in sixth but his second and final tyre change at just over half distance was the wrong strategy decision.

The Alpines looked much stronger in the race with Esteban Ocon doing plenty of overtaking to come home 7th and Fernando Alonso from the back of the grid came through to two points and 9th position.

Between them was Lando Norris for McLaren who drove very well considering he felt extremely unwell with tonsillitis and even had to be excused from media work after the race. Both McLaren and Daniel Ricciardo must be very concerned about his relative lack of pace at the moment regardless of which tyres they threw at it during the race. Something has to change there.

The stewards were very tough on track limits and drivers putting all four wheels over the white lines as opposed to the red and white kerbs which were the variable reference points in the past. This can only be applauded for consistency and clarity for teams, drivers and fans alike.

Precision and sticking to the actual race track must be rewarded, although we could all do with seeing the images which confirm the track limit breaches because from the onboard cameras they often look safely within the white lines.

And so to Monaco. Last year the cars seemed to have outgrown the track a little but let’s see what 2022 version can offer us. They’re not any smaller, in fact they are heavier, but they do seem much happier to hang out closer together at speed, as proven again in Barcelona.