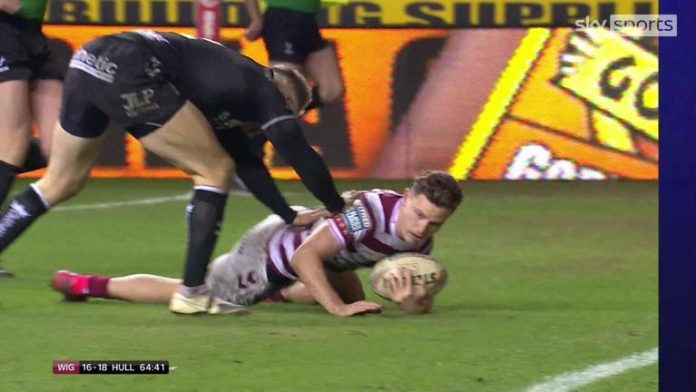 Tui Lolohea has been enjoying his new role at full-back for Huddersfield Giants in 2022, but on Saturday he and his team-mates will face a conundrum which has flummoxed opponents across the Betfred Super League: How do you stop Jai Field?

After an injury-ruined 2021, Field has roared back in style with Wigan Warriors this year and currently tops the Steve Prescott MBE Man of Steel leaderboard with 19 points – five clear of the second-placed player.

That man just happens to be Lolohea though, and this weekend will see he and the Giants plotting the downfall of Field and the Warriors as the teams go head-to-head for the first silverware of the season in the Betfred Challenge Cup final.

“I’m enjoying it, it’s so far so good and I’m going up against probably the best full-back in the comp at the minute,” Lolohea told Sky Sports.

“He’s been the stand-out, he’s leading Man of Steel at the minute, so it’s a good challenge for me and that’s where I want to be, playing against the best and testing to see where I am.

“I think we just can’t give him any time. When he has time and has it his way, that’s when he can pull your pants down.

“If we can limit that and be physical and put him in places he probably doesn’t want to be, that’s probably our way of controlling him.”

Although he has played in the No 1 role earlier in his career, Lolohea had expected to be joining the Giants to play in the halves alongside Theo Fages, filling the same position he did previously under Huddersfield head coach Ian Watson at Salford Red Devils.

Indeed, the Tonga international had spent much of pre-season preparing to take on that role as well, only for Watson to decide he fitted better at full-back and it is a move which has worked out perfectly – even if Lolohea was not as confident as his boss was that it would.

“I’m probably quite lucky I’ve played there before, but it’s still new and it has got its different challenges,” Lolohea said. “The way you play is more high speed – sprint here, sprint here, and more explosive stuff.

“I was training at half. I did a little bit at full-back, not too much, and as the season was getting close Watto threw me in there and he was confident in me

“I probably wasn’t as confident as he was, but Watto knows me better than anyone at the minute and it’s working and it’s my way of repaying him for showing faith in me.”

Lolohea is one of several ex-Red Devils now plying their trade at the John Smith’s Stadium under Watson, with the former Wales international bringing over some of the key members of the team which surprisingly reached both the 2019 Super League Grand Final and 2020 Challenge Cup final.

After a difficult first season at the Giants, Watson’s team have begun 2022 in an eye-catching manner, sitting fourth in the table – one point behind Wigan, who they beat in the Cup final dress rehearsal two weeks ago – as well as being in with a chance to lift the Cup for the first time since 1953.

“Obviously Watto has kind of brought us back and done good things again, and we’re in another final,” Lolohea said.

I probably wasn’t as confident as he was, but Watto knows me better than anyone at the minute and it’s working and it’s my way of repaying him for showing faith in me.

Tui Lolohea on switching to full-back at Huddersfield

“It’s good times for the club at the moment, I think we’re building nicely at Huddersfield and it’s our first year together as a new team.

“I think we’ve probably shocked a couple of teams from how well we’re going, but it means nothing if we can’t win anything.”

Lolohea’s Challenge Cup final appearance at Tottenham Hotspur Stadium with Huddersfield will be a much different one to two years ago when Salford’s 17-16 defeat to Leeds Rhinos was played behind closed doors at the final’s traditional Wembley home due to the Covid-19 pandemic.

Win or lose though, what the 27-year-old is most looking forward to is having his family there to watch him starring on one of rugby league’s biggest stages, although ideally he will be able to celebrate a long-sought major honour for the Giants.

“I want to leave a legacy at Huddersfield – I want to be a player who helped Huddersfield start winning trophies again,” said Lolohea. “I think that’s pretty cool to be a part of it.

“I think I’m more looking forward more to having my family there, seeing my kids be pitchside at a final. I kind of play for my family, my family is who I am and I’m looking forward to the challenge on Saturday of playing against a tough team, so we’ll see how we go.

“That’s special and I’m looking forward to seeing my kids after the game. Win or lose, they kind of get me up and get me going again.”