Home World The Ethical Problems with Breeding the White Tiger 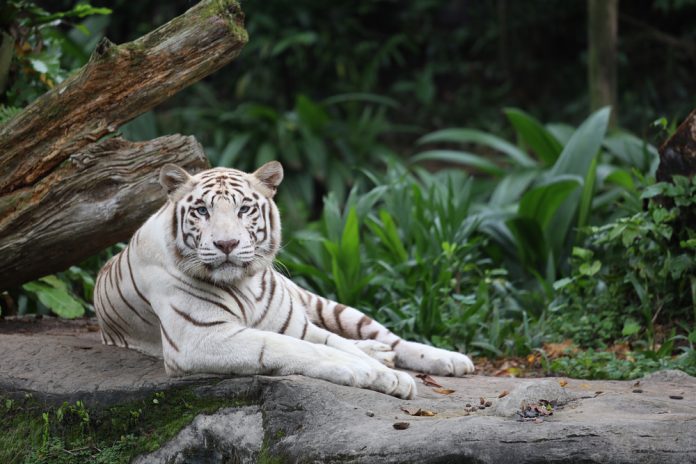 The white tiger is a popular animal in the U.S. Its bright coat and striking blue eyes paint a stark contrast against its orange brethren, and the rare specimen has historically drawn huge crowds to zoos and exotic animal performances. But many say the white tiger’s existence is unethical. And its future is murky.

Currently, it is estimated that there are about 200 white tigers left in the world. And that number is dwindling, due to the complicated reality of white tiger genetics.

White tigers are not a separate species or subspecies of tiger. A recessive gene causes their unique coloring that triggers leucism, or reduced pigment. A 2013 paper published in the Journal of Current Biology identified the gene as SLC45A2, a genetic variant known to also cause lightened pigmentation in horses, fish and chickens.

In the wild, this genetic anomaly is rare for tigers, with an estimated one in 10,000 births. It’s also considered a genetic detriment. It impedes a tiger’s ability to blend in seamlessly with its surroundings to hunt effectively. And in captivity, robust inbreeding carried on the many white tiger lineages, rather than natural occurrences of SLC45A2.

In fact, every white tiger in the U.S. is descended from just one tiger, named Mohan. In 1931, people gifted Mohan to a maharajah in India, and in 1958, they bred him to one of his daughters and created the first litter of white tigers born in captivity. They transported one of those cubs, Mohini, to the U.S. and gave her to the National Zoo in Washington, D.C. The zoo later bred her to one of her offspring, continuing the inbred line.

After Mohini’s rise to fame at the National Zoo, the white tiger breeding craze took off. Two of the most prolific rare-colored cat breeders were magicians Siegfried & Roy, whose use of white tigers, lions and other exotic animals proved one of their most lucrative career decisions. Over half a century, the pair reportedly performed 30,000 shows for 50 million people, and generated over $1 billion in ticket sales.

“Inbreeding is what caused what we have now, which is basically a mess,” says Harrison. “It’s not fair for these animals to be used like this, and for people to just use them and dispose of them.”

Within the last decade, accredited zoos and rescues have stopped deliberately breeding for white tigers. In 2011, the Association of Zoos and Aquariums banned the practice of intentional inbreeding for the expression of rare recessive alleles.

But no such regulations exist in the U.S. for privately owned big cats or unlicensed facilities. Although the House passed the Big Cat Safety Act in 2020, which would make private ownership illegal and bar public contact with the animals, the bill has yet to pass in the Senate.

Therefore, most of the white tigers that Harrison and other accredited rescues rehome are backyard cats, which private citizens own and who can no longer control them. Or, they find facilities that use the animals for dangerous pay-to-play business models, like allowing visitors to pose for pictures with the cats.

“It’s a horrible situation,” Harrison says. “I don’t know if you’ve ever seen a broken cat, but it’s so very sad.”

When Harrison and his team get a call about a white tiger, or any big cat that needs rehoming, they work with rescues who are a part of the Big Cat Sanctuary Alliance to find a safe place for the animals to go. These places follow strict no breeding and no interaction policies, for both animal and human safety.

These restrictions mean there may be white tigers left in the world. Big cat advocates like Harrison agree that at this point, this is a good thing.

“If you looked for the recessive genes and you did it scientifically, with good clean biology, you would end up having a pure white tiger that didn’t have all the abnormalities,” Harrison says. “But nobody wanted to take the time to do that — they just overbred them, strictly for money.”