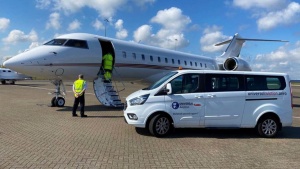 “Leading up to Northolt’s new weekend hours, we’ve seen tremendous interest from operators who underutilized the airport previously because of the lack of accessibility,” said Sean Raftery, Regional Managing Director, Universal Aviation. “Limited hours are the only thing that have held Northolt back from being one of the London area’s most popular business aviation airports. Since we took over operation of Northolt in 2021, this is the second time we’ve worked with the RAF to extend the airport’s hours.”

Some of Northolt’s advantages include:

– #1 airport for Central London and Cultural Activities – Closest GA-friendly airport for accessing Central London, perfect for many cultural events that typically draw private flyers. And it’s only a 25-minute drive to Hyde Park Corner.
– #1 for Sports – Close access for stadiums that host international sporting events, including Wembley (14 km), Twickenham (18km), Wimbledon (25 km), Emirates Stadium (27 km), and Tottenham (30 km).
– #1 for Airline Connections or Crew Changes – Closest airport to Heathrow to connect with commercial flights.
– Not Congested. Private. Very Exclusive – Passengers are using the same airport used by the Royal Family.
“Northolt has more built-in geographic advantages than just about any other London-area airport,” said Raftery. “In addition to its great location, passengers really like its exclusivity, privacy and security. We believe Northolt’s potential is unlimited.”

For more information on this location, including a 360 view of the FBO, visit Universal Aviation London-Northolt online.

Bartlett supports vision of a sustainable tourism economy by 2030

Bartlett supports vision of a sustainable tourism economy by 2030