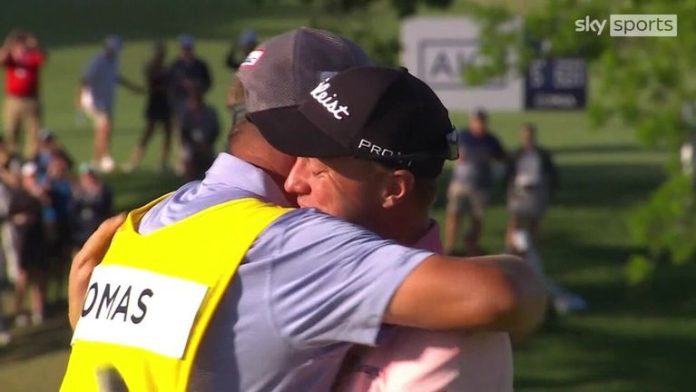 Justin Thomas trailed by eight shots with 10 holes to play in the final round of the PGA Championship but rallied to take the title after beating Will Zalatoris in a play-off; Thomas back in action in Charles Schwab Challenge, live on Sky Sports Golf from Thursday

Justin Thomas has called his comeback victory at the PGA Championship “unfathomable” and revealed his delight at ending any danger of becoming a “one-hit wonder” by claiming a second major title.

Thomas was eight shots off the lead after eight holes of his final round at Southern Hills last Sunday but rallied to set the clubhouse target at five under and then went on to beat fellow American Will Zalatoris in a play-off.

The World No 5 has opted against a rest week and will tee it up at the Charles Schwab Challenge in Texas, live on Sky Sports Golf from Thursday.

Reflecting on his major triumph last week, which became possible after Chile’s Mito Pereira double-bogeyed the final hole to surrender a one-shot lead, Thomas said: “I was eight back with 10 holes to go. That’s unfathomable.

“If I was looking at leaderboards, I probably would not have thought I even had a chance to win. It’s a huge learning lesson for me.

“You’ve got to play golf. Those majors and in golf tournaments, anything can happen. I just kind of kept plugging along, and somehow it happened. It was a whirlwind of a weekend.

“Five years has felt like an eternity since Quail Hollow. I was definitely glad that I could finally answer the question of when am I going to get my second [major] versus just being a one-hit wonder.

“I feel like I’ve been playing some of the best golf of my career the last year and have literally had nothing to show for it – no wins. It’s hard to win out here and you just don’t know when it’s going to happen again.

“For it to happen at the biggest stage, at a major, with my family there, I just was kind of taking it in and couldn’t kind of believe that it happened.”

Thomas’ victory was his 17th as a professional but first since pipping Lee Westwood to claim The Players Championship in March 2021.

Looking at how he can prevail at the Charles Schwab Challenge this week, the 29-year-old said: “By putting [the PGA Championship] behind me.

“I want to enjoy it, I don’t want to just act like it didn’t happen, but at the same time I have next week off potentially to just enjoy it and have some times with my family and friends if we choose to.

“I have a golf tournament this week, and I’m just trying to perform and play as well as I possibly can and hopefully give us something else to celebrate.”