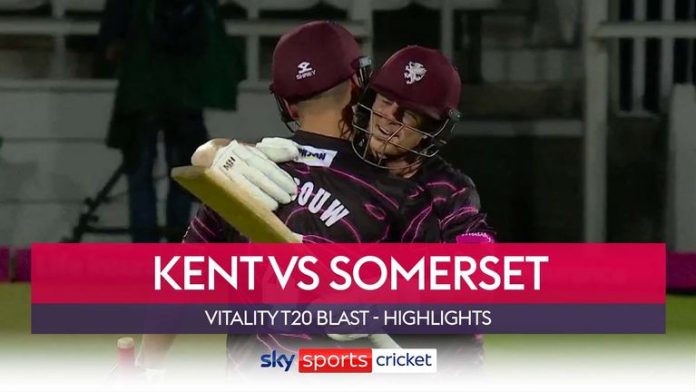 Harry Brook clubs 60 not out from 27 balls – his ninth fifty-plus score in 10 innings so far this season – as Vitality Blast gets under way; Brook helps Yorkshire beat Worcestershire while defending champions Kent lose to Somerset in repeat of 2021 final

England Test hopeful Harry Brook continued his electric form by smashing 60 not out from 27 balls as Yorkshire Vikings beat Worcestershire Rapids by seven wickets in their Vitality Blast opener.

Brook is in England’s squad for next week’s series opener against New Zealand at Lord’s, although he looks likely to be the batter to miss out of the final XI.

The 23-year-old gave another reminder of his talent at Clean Slate Headingley on Wednesday night, with a ninth fifty-plus score in 10 County Championship or T20 innings so far this season.

Brook creamed three sixes and six fours as his unbroken fourth-wicket stand of 87 with captain Joe Root (35no off 24) inside eight overs eased Vikings to their target of 173 with 11 balls to spare.

Brook has racked up 840 runs in six County Championship matches this term, with three hundreds and fifties in nine knocks, at an average of 140.

His T20 fireworks followed him plundering 486 runs in the same competition last year during Yorkshire’s run to the quarter-finals, which helped him earn an England T20 debut in the West Indies.

Yorkshire had wobbled from 70-0 to 88-3 against Worcestershire once the opening stand between Adam Lyth (40 off 24) and Dawid Malan (33 off 30) had been snapped.

Worcestershire’s innings had earlier stalled amid a cluster of wickets once top-scorer Jack Haynes (61 off 33), who nailed five sixes, was dismissed from the final ball of the 12th over – the Rapids slipping from 123-2 and going on to post an under-par 172-9.

Jordan Thompson picked up three wickets for Yorkshire, while Root dismissed Brett D’Oliveira at the end of a 20-run sixth over having been blasted for two sixes and a four.

Defending champions Kent Spitfires, meanwhile, began their title defence with an eight-wicket defeat to Somerset at Canterbury in a repeat of last year’s final.

Kent – aiming to become the first side in Blast history to win the tournament in successive years – were reduced to 31-4 in the eighth over before Jack Leaning (72no off 43), aided by George Linde (29 off 15), underpinned a recovery to 162-6.

However, that total proved insufficient as Rilee Rossouw (81no off 54) and Tom Abell (48no off 29) shared an unbroken third-wicket stand of 121 to guide their side to victory with five balls in reserve.

Somerset seamer Lewis Gregory had earlier done some of the early damage in the Kent innings, removing Daniel Bell-Drummond (12) and Spitfires captain Sam Billings (4), while he also dismissed Linde later on.

Zak Crawley – set to open for England in next week’s first Test of the summer against New Zealand – made just four for Kent before he was first man out in the second over of the game.