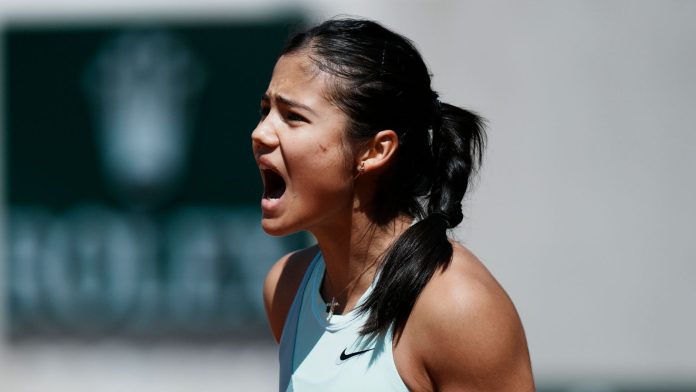 British No 1 Emma Raducanu lost in the second round of the French Open to world No 47 Aliaksandra Sasnovich; the 19-year-old says she has come a long way in the last year and is now really looking forward to playing in front of the fans in England

Emma Raducanu looked back on a positive clay-court season and a whirlwind 12 months, after her second-round exit at the French Open.

Raducanu ran out of steam against world No 47 Aliaksandra Sasnovich on Court Suzanne Lenglen to exit the Grand Slam tournament on Wednesday.

But when the Kent teenager was reminded that a year ago this week she was playing in a British Tour event at the Connaught Club in Essex, a month after sitting her A-levels, everything was put into some perspective.

Since that point 12 months ago, Raducanu has achieved an improbable US Open title success along with reaching the fourth round at Wimbledon and the second rounds in Paris and Australia.

“We were saying like with my team this morning, it’s pretty much a year anniversary since my comeback to competitive tennis. I was playing a Brit tour in Connaught,” Raducanu said.

“I think I have come a long way since then and I do really welcome going around the second time.

“It’s going to be a lot more familiar this time around. I feel like in the last 12 months I have definitely grown a lot.

“I think that it has been a pretty positive year just because I have learnt so much, and I think the amount of learning that I have kind of done outweighs any sort of result.”

Raducanu can take plenty from her clay-court season, and a 6-5 win-loss record is not to be dismissed, given that she only played her first professional match on the surface last month.

“I think my opponent played pretty well throughout and didn’t make any errors. It was a long match for me but the whole clay season has been pretty positive overall, I would say.”

Andy Murray says Wimbledon “will never feel like an exhibition” in response to comments by Cameron Norrie and Naomi Osaka.

Now Raducanu’s attention will turn full circle, back to the grass and Wimbledon – where her meteoric rise began. She returns to English courts and the grass-court major as a current Grand Slam champion.

“It’s going to be really nice to go home and play on home turf, on the home grass,” she said. “It is going to be a little bit strange in the beginning, because I have played on a clay court for so long now, I feel like it’s been weeks.

“Like, going onto a grass court I’m probably going to be a bit shocked at first. But I’m really looking forward to playing in front of the fans at home, and just all the support.

“Last year I experienced a little taste of it, but I feel like this year might be a bit more. I’m just really looking forward to the atmosphere that’s going to be around.”