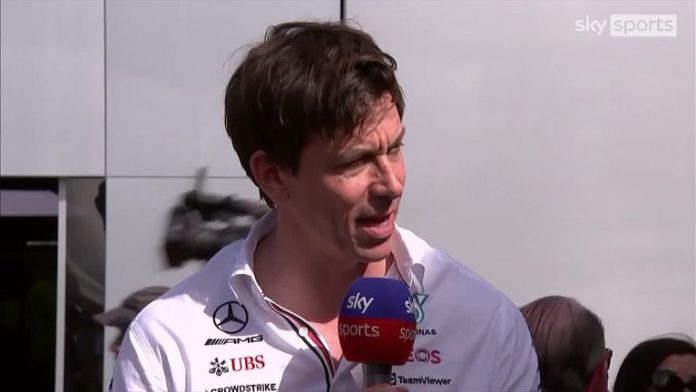 Mercedes say their expectations are “lower than any other circuit” for this weekend’s Monaco GP, which is all live on Sky Sports F1; watch Saturday’s qualifying at 3pm, and Sunday’s race at 2pm

Mercedes believe they made a “big step” last weekend but admit their expectations are low for the Monaco GP, with Toto Wolff saying F1’s famous street circuit is not the team’s “happy place”.

Mercedes enjoyed their most promising weekend of the season at the Spanish GP, with George Russell and Lewis Hamilton’s third and fifth prompting Wolff to declare the world champions are back in the title race.

But the Silver Arrows’ team boss also stressed there was still a gap to leaders Red Bull and Ferrari.

“We’ve seen another big step, probably we’ve halved the advantage to the front-runners,” Wolff said. “But still there’s lots of way to go in order to be in the fight.”

Mercedes appeared to solve their porpoising issues in Barcelona and Monaco’s lack of straights would ordinarily mean they are more confident for their chances. But Monte Carlo was not a particularly strong race for Mercedes even in their dominant years – with Red Bull often shining – and so Wolff is more cautious than ever for F1’s most famous weekend.

“Monaco in the past wasn’t our most happy place,” said Wolff, with Mercedes winning only one of the last four Monaco GPs. “Maybe because the car was the size of an elephant!

“I will be curious to see where we are this weekend. My expectations are lower than any other circuit… it’s going to be a learning point at least, to bring us back into the game.”

Ferrari, meanwhile, have played down Mercedes’ revival – insisting they still have ground to make up if they are to join the fight with Red Bull.

“Congrats to them, they recovered and they improved the speed of their car,” Ferrari boss Mattia Binotto told Sky Sports F1.

“On Saturday [in Spain] they were six, seven tenths on a qualy lap which is still a short circuit. On Sunday they finished 30 seconds to a Red Bull, and it would have been maybe 40 seconds to Charles [Leclerc, who retired].

Ferrari were a distant third in the championship last season, making Binotto’s comments all the more pertinent.

F1 2022 continues with a must-watch Monaco GP as drivers return to hallowed sporting ground. Watch all the action live on Sky Sports F1, with Sunday’s race at 2pm.