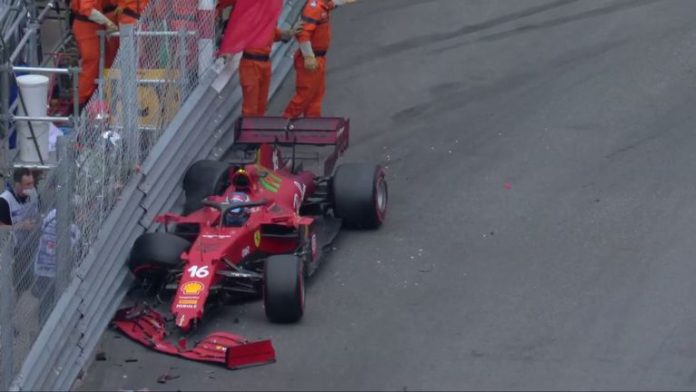 Ferrari’s Charles Leclerc has failed to finish each of his three F1 races at his home track; Watch the Monaco GP, F1’s most famous event, all live on Sky Sports F1, with Saturday qualifying at 3pm and Sunday’s race at 2pm

Charles Leclerc returns home for this weekend’s Monaco Grand Prix hoping to end a streak of terrible luck at the track he would most like to win at.

Monaco is a place every F1 driver dreams about winning at, but with Leclerc having grown up on the streets the race is contested on, there is extra meaning for the Ferrari driver.

A remarkable streak of bad luck at the circuit has seen Leclerc fail to finish a race in all three of his attempts in F1, while he also suffered a heart-breaking retirement in his one F2 appearance at the track.

Leclerc will hope that he has got his bad luck out the way before Monaco this year, with an engine failure having forced him to retire from a commanding lead at last weekend’s Spanish GP, allowing Red Bull’s Max Verstappen to win the race and take over the world championship lead from the Ferrari driver.

Here is a more detailed look at he series of events Leclerc has experienced at Monaco, which have led to suggestions he is ‘cursed’ at his home circuit.

Given how difficult it can be to overtake at Monaco, qualifying on pole takes on additional importance in the principality.

Leclerc did just that for Prema at F2’s 2017 Monaco GP, and when he led future F1 rival Alexander Albon off the start line, appeared in great shape for victory.

An early safety car appeared to have given those behind Leclerc a chance to get back into the race, but he showed superb pace to re-establish a lead that put him back in control of the race.

However, another safety car would follow, with unfortunate timing of its release causing Leclerc to lose time to his rivals and re-join in fourth.

As if that wasn’t enough, Leclerc would be called into the pits shortly after reporting dramatic vibrations on his front-left wheel, which turned out to be caused by suspension damage that would see him retire.

Leclerc would overcome that Monaco blip to dominate the 2017 F2 season, claiming the title and earning himself a seat with Alfa Romeo for the 2018 F1 campaign.

He would arrive in Monaco having made an impressive start to the season, and directly off the back of his first two point-scoring performances in F1, which had come at the Azerbaijan and Spanish GPs.

Having qualified 14th, Leclerc looked set to miss out on more points as he sat 12th with eight laps remaining, but was once more robbed of the chance to see the chequered flag.

A brake failure saw him smash into the back of the Toro Rosso of Brendon Hartley, forcing both to retire with the cars severely damaged.

Despite the setback, Leclerc would produce a series of impressive performances throughout the season, convincing Ferrari to seat him alongside Sebastian Vettel at the age of just 20.

Leclerc would make a solid start to his Ferrari career, finishing in the top five in each of his first five races for the team, including a podium at the Bahrain GP.

However, things would go badly from the off for Ferrari in Monaco, with Vettel’s crash in final practice on Saturday morning the first in a series of errors by both the team and its drivers.

On his first attempt at a flying lap in Q1, Leclerc severely locked up going into Rascasse, spoiling his lap and damaging the tyres in the process. Ferrari left him out to take another shot, with which he produced a mediocre effort to go sixth at the time.

Ferrari’s calculations suggested that the time would be enough to see him into Q2 and opted not to send him out for another run, which proved to be a fatal decision. Leclerc sat in his garage plummeting down the leaderboard as significantly slower cars took advantage of a rapidly improving track to relegate him to P16 and a humbling Q1 exit.

Faced with the near-impossible task of picking his way through the field, Leclerc had acknowledged before the race that he would need to “risk a crash” to do so.

He started well, climbing three places in the opening eight laps, but ultimately took one risk too many. On lap 11 he would hit the wall while attempting to pass the Renault of Nico Hulkenberg, and be forced to limp back to the pits with a puncture.

Ferrari would fit him with a new set, but the damage picked up on the way back to the pits would soon force his retirement, and a dreadful weekend came to an early end.

There was no 2020 Monaco GP as the race was cancelled due to the coronavirus pandemic, meaning there was that much more anticipation when the sport returned to its most famous venue in 2021.

Having failed to compete with Mercedes and Red Bull during the opening four races of the season, Ferrari suddenly found enough pace to be in the battle for pole on Saturday.

Leclerc emerged from the first runs in Q3 with the fastest time, but then came a dramatic twist. During the second and final runs, Leclerc would hit the wall, ending the session and denying his rivals the chance to knock him off pole.

It appeared to have been a moment of fortune for Leclerc, as Ferrari found no damage to the car’s gearbox on Sunday morning and insisted he was ready to start the race from pole.

However, as he left the pits to make his way to the grid, a left driveshaft issue would emerge, which would prevent him from taking any part in the race.

If there was any doubt remaining that Leclerc’s luck is out at his home circuit, it was surely confirmed as he took part in the 2022 Monaco Historique event earlier this month.

Leclerc showed up to the event to drive a three-lap demonstration in a vintage 1974 Niki Lauda Ferrari.

On his third and final lap, the brakes would fail Leclerc as he entered Rascasse, causing him to slam into the barrier.

Leclerc took to social media shortly after the incident with a humorous take, while the team also spoke out to clarify that the crash had been caused by mechanical error.

The only consolation Leclerc can take from his latest Monaco incident is that no points were available to him in Lauda’s classic car, and that he is surely due a change of fortune this weekend.

All the Monaco GP is live and exclusive on Sky Sports F1, while viewers will also be treated to the world-famous Indianapolis 500 on Sunday night.