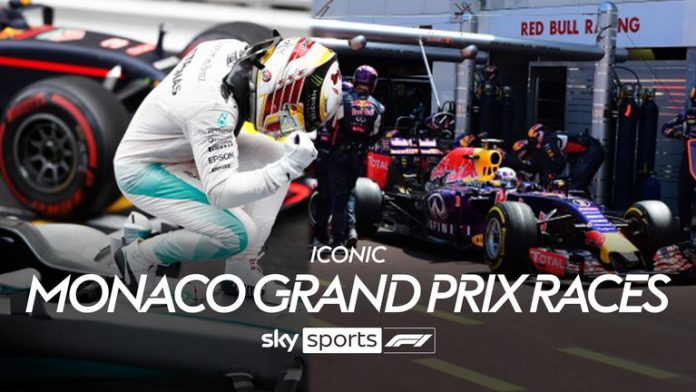 Lewis Hamilton details the demands of the weekend, the luck needed and his memories of being introduced to the principality by Nico Rosberg; Special feature – ‘Lewis Hamilton, Monaco GP through my eyes’ can be watched before Friday’s practice sessions

Lewis Hamilton has opened up on the challenges and demands of the iconic Monaco GP, admitting he was too tired to even celebrate his last victory in F1’s “most draining” race, which he describes as a “lottery”.

In a Sky Sports F1 special reflecting on Hamilton’s Monaco memories – which is part of our bumper coverage this weekend – the seven-time world champion also speaks of his desire to add to his three momentous wins.

F1’s thrilling 2022 season is heading to Monte Carlo for round seven, with Hamilton one of 20 drivers preparing for the ultimate test around the narrowest of street circuits as barriers loom with every perilous turn.

“It’s unique and probably one of the most intense weekends,” Hamilton admitted in the Sky Sports F1 exclusive. “The desire and the will to win is revved up.”

Hamilton, who enters the weekend only sixth in the championship for Mercedes, added that after beating Max Verstappen to victory in 2019, he was too exhausted to even enjoy the day.

“Mentally and psychologically it is probably the most draining [race],” he explained. “Because it is so narrow, so quick, so short between the corners.

“When I won that race with Max behind me, I wasn’t able to enjoy the rest of the night. I had to go home and go to bed… I was so mentally drained!

“All my friends were texting me, ‘are you coming out to celebrate?’ I was like… I’m just exhausted!”

Hamilton: Rosberg introduced me to Monaco | Stars have to align to win F1 ‘lottery’

The special feature offers unique insight from Hamilton about Monaco and it will be broadcast on Sky Sports F1 ahead of Friday’s practice sessions, while a shorter version will also be part of our qualifying build-up on Saturday.

In it, Hamilton also reveals that he was first introduced to Monaco, where he now resides, by former team-mate Nico Rosberg, who he infamously fell out with during an incredible intense 2016 title rivalry.

“I didn’t actually go Monaco until I was 13,” says Hamilton. “I was invited by Nico. We were karting together in Italy, he was karting for another team at the time but we ended up being friends. They invited me to Monaco which is where he grew up and I remember being there at the time and thinking, ‘wow, this is the most beautiful place I’ve ever seen’.

“I’d say that trip opened my eyes to what was possible. I was like, ‘one day I want to live here’. That whole place… I was thinking that’s what I’m going to work hard to, to eventually get there. I don’t take it for granted.”

Hamilton, who details how he used to get “so nervous” for the Monte Carlo weekend, is a three-time winner in Monaco, three short of his hero Ayrton Senna and two off Michael Schumacher.

“When I think about Monaco of course I think about Ayrton and Michael,” he says. “But my perspective of it now is a little bit different. I don’t think about being up there with all the greats… it is a track where there are so many elements and so many things have to align to win that race.”

Hamilton adds: “It’s just a lottery of a Grand Prix. You need to be lucky, you need to position yourself right in all parts, from practice, qualifying, setup, putting all the pieces of the puzzle together.

“There are so many more elements and I think that’s all magnified, that one race, more so than any other race.

“It’s an iconic race. I feel like I’ve had the ability to have won it more often, as so many drivers have, but I just count myself very fortunate to have had the three wins that I do have there and I’d like to extend it to four… I’ll try.”