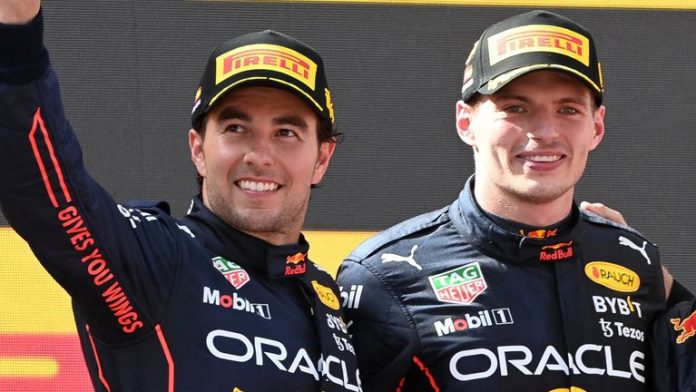 Max Verstappen tells Sky Sports F1 that he has an “amazing relationship” with Sergio Perez and plays down Spanish GP controversy; But Charles Leclerc disagrees about Red Bull team orders; Watch all Monaco GP live only on Sky Sports this weekend

Max Verstappen has moved to play down any Red Bull controversy from the Spanish GP, saying the team’s explanation for their strategy has made it clear Sergio Perez would have finished behind him regardless.

Verstappen comfortably won last weekend’s race to take the F1 championship lead, although he was helped along the way by team-mate Perez twice letting him past, notably in the final stages.

Afterwards, Perez said he wanted internal discussions with the team – claiming he could have won the race with a different strategy and similar assistance from Verstappen, with the pair on alternate strategies.

That prompted talk of Red Bull using team orders to help Verstappen, who is 25 points ahead of Perez in the standings. Red Bull, however, dismissed that and Verstappen has also now said his three-stop strategy would have been enough to win the race even without Perez’s help.

“We have an amazing relationship,” Verstappen insisted about Perez in an exclusive interview with Sky Sports F1 ahead of the Monaco GP.

“But also after the race, once you sit down with the team, they explain exactly what was going on and I do think how we finished, was exactly how we were going to finish anyway.”

According to Leclerc, Red Bull have already made it “clear” they are favouring Verstappen with their decisions and he isn’t expecting similar from Ferrari despite his advantage over Carlos Sainz,

“Red Bull made it clear what are their intentions and they did it very early in the season,” said the Ferrari driver.

“Concerning us [and team orders], I haven’t spoken about it with Mattia [Binotto, team boss] and I haven’t heard of this for now.

“I think for Sainz, it’s just a matter of time he gets with us and he gets more at ease with the car.

“I don’t want to rely on that either, I just want to do the job in the car and if we are strong enough, we have already made it clear we can win races anyway and if we do a strong enough job I’m pretty sure the chances are there anyway.”

The full interview with Verstappen and Sky Sports F1’s Natalie Pinkham will air during our Monaco GP build-up on Sunday at 12.30pm.

Elsewhere in the interview, Verstappen says that despite his new championship lead, Red Bull have to “improve” – while he also expects Monaco to be a difficult weekend against Ferrari.

“Of course I’m feeling good but it also really shows you that things can really change very quickly and you cannot retire, especially when it’s so close,” he stated.

“Of course I would have liked to retire a bit less, but nevertheless we’re still in the lead here.

“I also look at pure performance, and I think we do need to improve a bit more, especially over one lap and of course in Monaco we know it’s all about that one lap.

“I don’t expect it to be an easy or straightforward weekend for us here compared to Ferrari, but it’s also pretty early on in the season. I’m pretty relaxed.”

On the DRS issues that prompted Verstappen fury over team radio in Barcelona, the Dutchman added: “I hope we can fix it… but around Monaco it’s not a big problem.”

The whole Monaco GP weekend is exclusively live on Sky Sports F1, with the track action starting with Practice One on Friday from 12.30pm.