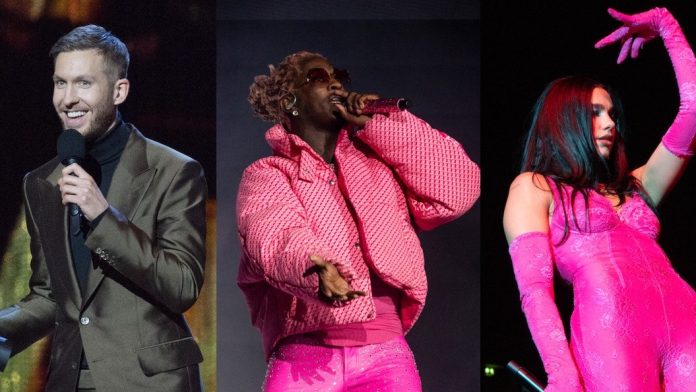 Young Thug and Dua Lipa have joined Calvin Harris for a new song. It’s called “Potion” and you can hear it below.

The song appears on Harris’ forthcoming album Funk Wav. Bounces Vol. 2. It also marks the first new single to feature Young Thug since the rapper was indicted on racketeering charges, as well as drug and gun possession charges earlier this month.

Harris previously worked with Dua Lipa on “One Kiss” and with Young Thug on “Heatstroke” (which also featured Pharrell and Ariana Grande). Earlier this year, the Scottish DJ linked up with Love Regenerator, Riva Starr, and Sananda Maitreya for the single “Lonely.” In 2020, he collaborated with the Weeknd on their track “Over Now.” Harris issued his latest album Funk Wav Bounces Vol. 1 back in 2017.

Dua Lipa recently released “Sweetest Pie” with Megan Thee Stallion, along with a music video directed by Dave Meyers (whose credits include visuals for Kendrick Lamar, Normani, Drake, and more).