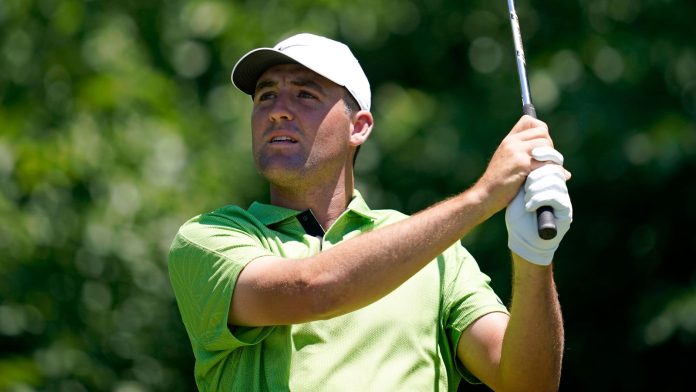 Eight players carded four-under-par rounds of 66 on the first day of the Charles Schwab Challenge, including world No 1 Scottie Scheffler

Scottie Scheffler was one of eight players to shoot a four-under-par 66 on Thursday in the first round of the Charles Schwab Challenge in Fort Worth, Texas.

Scheffler rebounded from missing the cut at the PGA Championship – his first missed cut since October – with a bogey-free round. The Masters champion started his day on the back nine and made three of his four birdies between the 14th and 18th holes.

“[At] the PGA, I just kind of got on the wrong side of things and I didn’t play good,” Scheffler, a Dallas native, said. “I just made too many errors and that’s what’s going to happen in a major championship.”

Scheffler was the only co-leader to avoid a bogey on his card. Reed, a nine-time PGA Tour winner and 2018 Masters champ, compiled five birdies before one misstep on his final hole, the par-four ninth. He overshot the green and had a poor chip coming back, leading to a bogey.

Reed is aiming for his first top-20 finish since early January at the Sentry Tournament of Champions.

“Honestly I feel like there’s been too many days that I’ve done a lot of things really well and just the number hasn’t really reflected it,” Reed said.

“But the great thing about a season is it’s a season. You have a lot of time left.”

At the other end of the spectrum were Hossler and Varner, who had wild days on the course.

Hossler holed out for two eagles in his final four holes – both par fours. He knocked in his second shot at the sixth hole from 64 yards away and holed out again from 134 yards out at the ninth, which handed him a share of the lead.

Varner opened with a bogey at the par-five first hole, rang up a string of three short birdie putts and bogeyed again at the fifth.

After the turn, he went birdie-eagle-birdie at the 10th through 12th holes; he left himself just five feet for his eagle putt at the par-five 11th thanks to another tight approach shot. However, two more bogeys soon knocked him back.

“At the end of the day it’s four-under,” Varner said. “I think that’s a really good score. It’s a great start, but we understand that it’s not how you start, it’s how you finish.”

Elsewhere, Dallas-Fort Worth favourite Jordan Spieth opened with a one-under 69, Justin Thomas shot a one-over 71 in his first round since winning last week’s PGA Championship and Will Zalatoris, who lost to Thomas in a play-off and also hails from the Dallas area, shot a two-over 72.

Six months of space travel wastes as much bone as two...