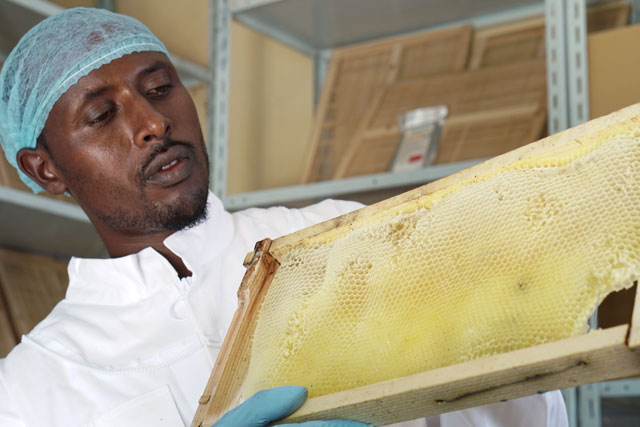 Hassan waves from the small green tuk-tuk that has brought him from home to his beloved and ever-growing apiary. Having gone from two traditional hives in 2013 to 150 today, the beekeeper has good reason to smile. His friends describe him as “born with a bee” — a saying in Somaliland for someone who is very knowledgeable and passionate about something.

From Gebiley in Somaliand, Hassan Muhumed Abdilaahi started his journey into beekeeping at the age of 24.

“At that time, the main challenge we faced in the country was a lack of modern hives, as well as harvesting and processing tools,” he explains while getting dressed in his protective suit. Although his business is growing, times have not always been easy for the beekeeper. His breakthrough came in 2014, when he attended a beekeeping training conducted by FAO under a project funded by the United Kingdom through the Sustainable Employment and Economic Development (SEED) Programme. “That changed my life,” states Hassan. “After the training, they provided us with two modern hives and a complete beekeeping start-up kit, with a beekeeping suit, smokers, knives and brushes.”

Hassan confirms that with 150 beehives in his apiary, his twice-yearly production has increased impressively. “I used to produce only 15 kg of honey per season. Now I am producing 1000 kg.” Although recurrent droughts in the area can disrupt his activities, the bees manage to maintain a fair level of production. “Developing capacities and supporting households with the right materials are two key factors for spurring sustainable production,” explains Erastus Mbugua, a FAO livestock officer supporting beekeeping in Somalia. “Through projects funded by Canada and the European Union, FAO distributed 475 hives in 2018, and expects to deliver around 700 in 2019.”

Beekeeping has nevertheless been traditionally looked down on in Somalia, mostly due to a lack of knowledge and skills. In a country with a strong livestock culture and where 60 percent of the population rely directly or indirectly on livestock activities, most are not aware of the high potential of processing hive products. “People perceive beekeeping as an unprofitable business,” says Hassan. Yet from honey alone, his annual production is equivalent to selling 530 goats at an average market price: “I know as a matter of fact that beekeeping is profitable — I love bees.”

Hassan’s progress has allowed him to hire three employees. Two young men work with him at the apiary and one young woman is in charge of marketing. “Women play an important role in beekeeping, especially for business development and marketing,” explains Hassan. Indeed, women make up 30 percent of the beneficiaries of FAO’s beekeeping training, although they don’t generally deal with the harvesting process since it is culturally considered dangerous and therefore not appropriate for female workers.

As well as beekeeping, Hassan now delivers trainings in Somaliland to pass on his wealth of knowledge. He has so far trained more than 200 young people interested in learning how to make a profit from beekeeping. Some have already turned into serious beekeepers: “Agriculture is full of opportunities for youth employment,” affirms the versatile beekeeper. He also encourages livestock and crop farmers to take up beekeeping to improve pollination for higher yields, as well as to diversify and increase household income, which is key in an area severely affected by extreme weather shocks such as droughts and flash floods. Beekeeping is an activity that can generate income within a few months and with a relatively small investment in labour and resources.

Hassan’s success is not down to luck or hard work alone — much can be attributed to his curiosity and constant quest to learn new techniques and strategies to improve his business. He scours the internet almost every day in pursuit of innovation. The Web has been another important “teacher” for Hassan, who did not follow any formal education path as a child. “Many of the tools that I have and use at the moment, I have found and learned of on the internet,” he says while presenting them in his processing plant, back from the apiary.

Hassan is now able to build the tools he needs himself, including the hives: “Initially making beehives was difficult for us, but I am currently constructing all the hives for my apiary”. He is also selling the hives to other beekeepers, and works mostly with the popular, stackable Langstroth type. “Building artisanal capacity is fundamental for the sustainability of beekeeping in Somaliland,” says Abdideeq Yusuf, FAO animal health officer in Somaliland.

Hassan and one of his employees, Mukhtar Mohamed Ahmed, are extracting honey from the homemade honeycombs. “Our produce is natural and clean, we do not add any sugar or additives,” Mukhtar says while kneeling to collect the honey sliding beautifully into a transparent bucket. It is now time to package the honey, which he will then sell all over Somaliland and even to some customers abroad as well.

South Sudan: Facts and figures for 2019

Hunger threatens over half of the population in South Sudan