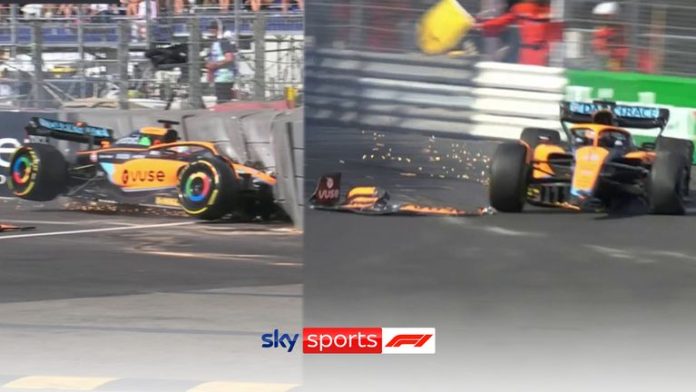 Charles Leclerc sealed a practice double on Friday at the Monaco GP as a Ferrari one-two in the day’s second session appeared to put them a step ahead of Red Bull.

Having appeared tightly matched with Red Bull in the opening session, Ferrari separated themselves from their title rivals in P2, as home hero Leclerc edged team-mate Carlos Sainz by less than half a tenth.

Sergio Perez beat world championship leader Max Verstappen to third, with both Red Bulls three to four tenths back from the Ferraris.

Lewis Hamilton endured a nightmare day as the seven-time world champion failed to build on progress made at last weekend’s Spanish GP as he finished 12th, almost a full second behind his Mercedes team-mate George Russell, who was sixth behind the impressive McLaren of Lando Norris.

It was not all good news for McLaren though, with a heavy crash for Daniel Ricciardo at the Swimming Pool section ending his session after just 15 minutes and bringing out a red flag that caused a brief delay.

Several drivers needed to use to the run-off area at the first corner, Sainte Devote. Sebastian Vettel almost crashed at the Swimming Pool moments before Ricciardo’s incident, while both Norris and Russell reported contact with the barrier, which they appeared to get away with.

Leclerc on track for crucial pole

With Leclerc having narrowly topped Perez in the earlier session, Ferrari and Red Bull, who between them have shared all six victories and pole positions this season, looked set for another close battle in the opening stages of P2.

Leclerc exchanged fastest times with Perez and Verstappen during the first half of the session, before completing a lap that they were simply unable to challenge.

Sainz, who has repeatedly failed to keep pace with Leclerc during the opening races of the season, on this occasion had a response, setting a time that suggests he will be in the hunt for pole position alongside his team-mate in qualifying on Saturday.

Before then, Saturday morning’s third and final practice session could prove crucial, with Verstappen likely to seek improvements that will at least enable him to be the fastest driver in his own team, as he seeks to extend a streak of three successive victories.

With overtaking hugely difficult at the street circuit, qualifying at Monaco represents perhaps the most important Saturday of the season, with pole position providing a massive advantage on Sunday.

However, Leclerc, who has failed to finish the race in each of his three F1 appearances at his home circuit, will take nothing for granted as he seeks to regain the championship lead he lost to Verstappen when an engine failure saw him retire from the lead in Barcelona last weekend.

After coming away from Barcelona feeling hugely positive, Friday in Monaco appeared to bring Hamilton back down to earth as he struggled from the outset with “crazy bouncing” on his Mercedes.

Not for the first time this season, his younger team-mate Russell appeared to cope better with the challenging car, and was the far more competitive of the Silver Arrows.

Speaking to Sky Sports F1 between the two sessions, Mercedes boss Toto Wolff admitted the team faced a dilemma in terms of balancing the performance of the car with driver comfort.

Mercedes posted on social media that Hamilton’s request for additional padding on his elbows during the first session had been addressed for the second, but that did not appear to aid the seven-time world champion.

“I think we have a ride issue, that is something we have had through the season on the bouncing,” Wolff said. “Sometimes it is a combination between the aero and the stiffness, today it is the stiffness.

“It looks like our car performs because we were quick. Overall I think it is a good car but it is just undrivable like this.”

Norris was hugely impressive once more, particularly considering he continues to recover from tonsillitis, having battled through the illness during last weekend’s Spanish GP.

The 22-year-old Brit maintained the consistency he has shown throughout his F1 career, finishing fifth in both sessions on Friday.

Norris’ excellent performance only served to highlight his team-mate Ricciardo’s struggles, which reached a new low with a nasty shunt into the barriers.

The incident comes just days after McLaren chief executive Zak Brown told Sky Sports’ Any Driven Monday the Australian is not meeting the team’s expectations, and only increases the pressure.

A former race winner in Monaco during his time with Red Bull, Ricciardo will need all his experience at the circuit to help him overcome the time he lost following his crash.