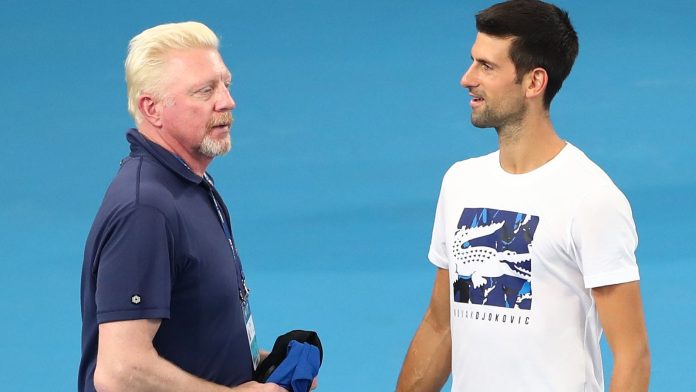 Becker was jailed for two and a half years for bankruptcy offences last month and will not be eligible for release until he has served at least 15 months; Novak Djokovic, whom Becker coached between 2013 and 2016, says he hopes the German stays “healthy and strong”

Novak Djokovic says he has reached out to Boris Becker’s family to offer support after the tennis great was sent to prison for bankruptcy offences.

Six-time Grand Slam champion Becker – who coached Djokovic between 2013 and 2016 – was sentenced to two and a half years last month and must serve least 15 months before being eligible for release.

World No 1 Djokovic, speaking after his third-round victory over Aljaz Bedene at the French Open, said he had contacted Becker’s son, Noah, asking if there was a way he could help.

“It’s only been less than a month. I just hope that he will stay healthy and strong,” said Djokovic.

The Serb had said shortly after Becker’s sentencing he was “heartbroken” for the German.

“He’s a friend, a long-time friend, someone I consider close in my life and has contributed a lot to my success in my career,” Djokovic said of Becker earlier this month.

“I’m not going to get into details of the verdict, because I’m not in a position to do that, but, as his friend, I’m super sad for him

“I just hope he will go through this period that he has to be in jail and that when he comes out he’s able to live his life.

“I don’t know if we’ll use the word ‘normal’ because life is definitely changing for anybody going to prison, especially for that long of a time.

“I don’t know how things will turn out for him. I just pray for him. I hope things will be well in terms of his health, his mental health, because that’s going to be the most challenging part.”