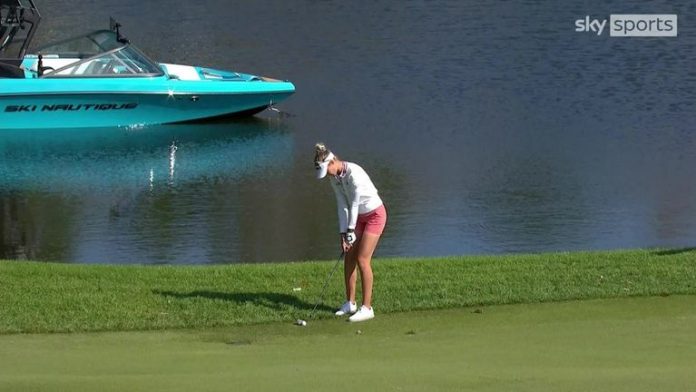 “I’m honestly just grateful to be out here”; Korda underwent surgery in March after her arm swelled up following a workout; She will return to action this week at the US Women’s Open – watch live this week on Sky Sports

World number two Nelly Korda has low expectations for this week’s US Open and is just grateful to be back competing after a blood clot in her arm.

Korda revealed back in March that she had been diagnosed with the clot after her arm swelled up following what she said was a “typical morning workout”.

The 23-year-old Olympic gold medallist subsequently underwent surgery and will compete for the first time since early February at Pine Needles in North Carolina in the second major of the year.

“I was just feeling funny,” Korda told a pre-tournament press conference when asked how the blood clot came to be diagnosed.

“My arm wasn’t feeling too great. I listened to my body. I went to the ER, got some ultrasounds, found out that I had a blood clot, went back home and saw a specialist, Dr Michael Lepore; he was great. Can’t think of a better doctor to do the procedure. I’ve been good ever since.

“Obviously I did a lot of rehab and went out to California for a month, did rehab there, worked with my coach Jamie Mulligan. Wanted him to be there for when I first started hitting balls.

“I started gradually, really slow. I probably went like 60 per cent. I was hitting my 8-iron 100 yards to see how it was feeling, and then once I got the clearance from my doctor I was good to go.

“I’ve missed it so much. Definitely as I got closer to this week, I started finally hitting it a little longer, I think the juices started flowing a little bit more, but I’m so happy to be out here. I’ve missed everyone and I’m just grateful.”

Asked what her expectations for the week were, Korda added: “To tee up and to hit my first shot on Thursday. That is as far as I’m looking right now.

“I’ve been out of competition since early February and I’m honestly just grateful to be out here. I’m going to take it one step at a time. I’m not expecting too much.

“I didn’t want my first event back being the US Women’s Open, I was just more thinking like I want to be 100 per cent.

“It’s like when you’re sick and your nose is stuffy, you’re so grateful to be able to breathe. I feel like it’s the same way. I think when it’s kind of taken away from you, you sit back and you realise how amazing a sport it is and then how you can travel the world and how you can just do what you love.”