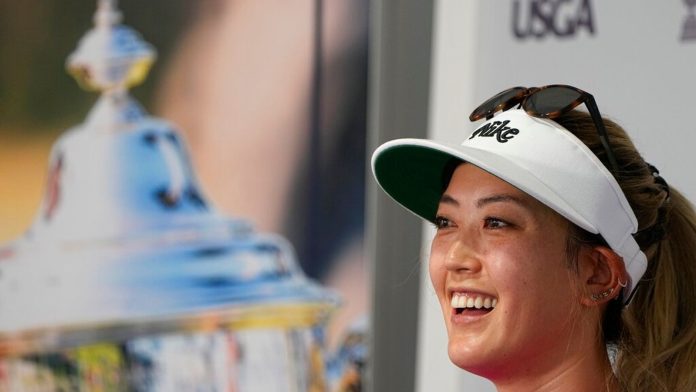 Wie West won the US Women’s Open in 2014 at the age of 24; she intends to take part in the major next year at Pebble Beach; The 77th US Women’s Open gets underway at Pine Needles Lodge & Golf Club on Thursday – watch all of the action, live on Sky Sports Golf

Michelle Wie West says she would not be retiring if she had not won the US Women’s Open in 2014, and has no regrets as she prepares for her penultimate tournament in professional golf at Pine Needles Lodge & Golf Club.

Last week, the 32-year-old announced she is stepping away from the LPGA Tour, with her final two events being the US Women’s Open in 2022 and 2023.

The American, who gave birth to her daughter Makenna in 2020, says her body now struggles to cope with the rigours of professional golf.

“It was kind of bittersweet always to announce that, but it’s something that I’ve been thinking about for a while,” said Wie West.

“You know, first off, I want to say I have zero regrets in my career. There’s always that inkling of wishing I had done more.

“But I feel like no matter what, no one is ever going to be 100 per cent satisfied. I have definitely had an up-and-down career, but I’m extremely proud of the resiliency that I’ve shown over my career.

“I’m extremely proud to have achieved the two biggest dreams that I’ve had, one being graduating from Stanford, and the other winning the US Women’s Open. To check both those off the list means everything to me. I’m very proud of myself.

“I’ve always wished I would have done more, but I feel like everyone kind of feels that way, so I’m definitely giving myself some grace and enjoying this last week.

“If I hadn’t won the 2014 US Open I definitely wouldn’t retire, and I would still be out here playing and chasing that win. That win means everything to me.”

The US Women’s Open will mark her second-to-last tournament and Wie West has maintained her focus on soaking up the atmosphere of the event rather than contemplating the meaningfulness of a victory.

She added: “Yeah, I’m definitely managing expectations right now. I definitely haven’t had the practice schedule that I usually do leading up to the US Open.

“Obviously the competitive side of me wants to win and do the best I can. It’s going to be a fun week.”

Wie West’s career has garnered praise from the returning 10-time major champion Annika Sorenstam, who remembers the 32-year-old as an impressive teenager with a powerful swing.

“To have an amateur, a teenager at that time, that was really impressive. She hit the ball a long way.

“I remember her swing was really very powerful, especially her wedge game. She put a lot of spin on the ball and being 6-foot something like that, I was, like, wow, this girl has got it.

“Like I said, she still had a great career in many ways. Maybe other people thought she would do more, but it’s hard to win out here. She won a US Open, as you know, and other events. She’s been great for the game.”

Watch the US Women’s Open throughout the week live on Sky Sports. Live coverage begins on Thursday from 6pm on Sky Sports Mix.