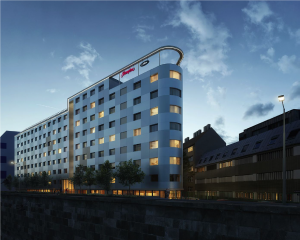 Hilton has announced plans to open one of the world’s largest Hampton by Hilton hotels in Vienna. Following a franchise agreement with partner Primestar Hospitality, the new development is scheduled to open in autumn 2024.

Patrick Fitzgibbon, senior vice president, development, EMEA, Hilton said, “Powered by customer demand for contemporary modern design and friendly and reliable service, Hampton by Hilton is our fastest growing brand in Europe, the Middle East and Africa, with more than 200 properties trading or under development. In Europe, Hampton by Hilton has more than doubled its portfolio in the last five years, arriving in new markets including Belgium, Latvia and Austria, which welcomed 32 million international visitors in 2019. Working with our trusted partner Primestar, we are excited to build on the brand’s Viennese presence with a second Hampton by Hilton, the largest in Europe and a valuable addition to the brand’s European portfolio.”

Consistently named the most liveable city in the world, Vienna boasts abundant green spaces and museums, architectural marvels and cultural cornerstones like the city’s famous coffee houses. Schönbrunn Palace, just over 20 minutes’ walk from Hampton by Hilton Vienna City West, is one of Europe’s grandest Baroque palaces. As well as numerous historical and cultural attractions, including the Rathaus, Belvedere Museum and the Hofburg, the city offers a vibrant restaurant and nightlife scene, from fifteen Michelin starred restaurants to local establishments serving anything from authentic Austrian cuisine like Wiener Schnitzel and Tafelspitz to international specialities.

Located in western Vienna and joining four Hilton properties currently trading in the city, Hampton by Hilton Vienna City West will be well located for easy access to Wien Westbahnhof, one of Vienna’s major railway stations, just a 15-minute walk away. With a comprehensive public transport system consisting of buses, trains, trams and underground lines, travelling around the city is simple and fast. The hotel will be an ideal destination both for international travellers, who will be able to reach the hotel in under 40 minutes by public transport from Vienna’s airport, as well as domestic visitors arriving by car, who will be able to utilise the hotel’s 67 secure car parking spaces.

As well as a popular leisure destination, Vienna is also one of the world’s leading conference locations, ranking sixth according to the International Congress and Convention Association. The city hosted more than 5,000 congresses, corporate events and incentives in 2019. With Vienna home to many international company offices as well as one of the four global headquarters of the United Nations, Hampton by Hilton Vienna City West will also be well poised to take advantage of the Austrian capital’s significant business travel market.