Home World China and Cambodia break ground at naval base in show of ‘iron-clad’... 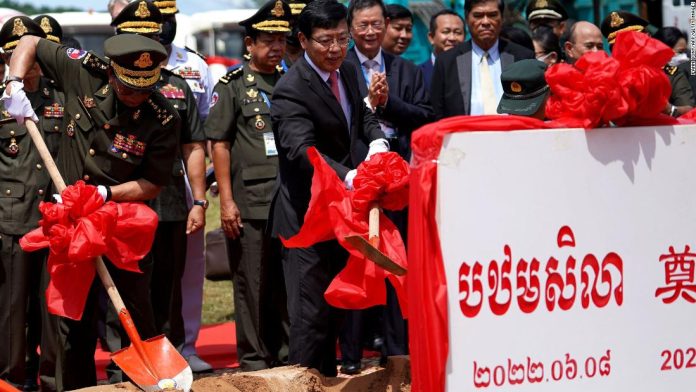 The launch of the project at the Ream Naval Base, which Cambodian officials said will use grant aid from China to renovate the port, comes amid Western concern that Beijing is seeking a military outpost at the Gulf of Thailand facility.
Cambodian Defense Minister Tea Banh dismissed such claims, stressing during the ceremony that the project is in line with Cambodia’s constitution, which bars foreign military bases on its territory, and that the Southeast Asian nation is open to development assistance from other countries.
“We need to upgrade our base to protect our nation, territory and sovereignty,” Tea Banh said, describing the project as a “modernization” that includes construction and renovation work on a dry dock, pier, and slipway, according to state-run news agency Agence Kampuchea Presse (AKP).
Upgrading the base is “not targeted at any third party, and will be conducive to even closer practical cooperation between the two militaries,” Chinese Ambassador Wang Wentian said at the groundbreaking.
“As a strong pillar of the iron-clad partnership, China-Cambodia military cooperation is in the fundamental interests of our two nations and two peoples,” he said, as quoted by AKP.
China’s role at the Ream Naval Base, which occupies a strategic position near the southern tip of Cambodia close to the South China Sea, has drawn scrutiny from Washington in recent years, as it monitors for signs of Beijing expanding its military footprint.
Deputy Secretary of State Wendy Sherman reiterated US concerns about China’s “military presence and construction of facilities” at the base in a meeting with Cambodia’s Deputy Prime Minister and Foreign Minister Prak Sokhonn last month, according to the US State Department.
Both Phnom Penh and Beijing — which have bolstered economic and diplomatic ties in recent years — have pushed back strongly over such concerns, this week dismissing a report that China is building its own naval facility at the Ream Naval Base.
The denials came after The Washington Post reported on Monday, citing unnamed Western officials, that China is secretly building a naval facility on the northern portion of the base for the exclusive use of its military.
In a press briefing on Tuesday, Chinese Ministry of Foreign Affairs spokesperson Zhao Lijian called the allegations “a typical bullying act” from the United States.
“The US has turned a deaf ear to Cambodia’s position, repeatedly making malicious speculations, attacking and smearing Cambodia, and even threatening and pressuring Cambodia,” Zhao said.
Prak Sokhonn also dismissed “groundless accusations” in a phone call with Australian Foreign Minister Penny Wong on Tuesday, according to AKP.
He added that the renovation of the base served “solely to strengthen the country’s naval capacities to protect its maritime integrity and combat crimes.”
Australian Prime Minister Anthony Albanese called the report “concerning” during a visit to Indonesia on Tuesday.
“We’ve been aware of Beijing’s activity at Ream for some time, and we encourage Beijing to be transparent about its intent and to ensure that its activities support regional security and stability,” he told reporters, adding that the Cambodian government had “consistently assured” Canberra that no foreign military would be given exclusive access at the Ream base.
China’s aggressive behavior in the South China Sea in recent years, as well as its growing navy and assertive foreign policy, has raised concerns from Western leaders that Beijing may seek to parlay security and other deals with foreign governments into an overseas military presence.
Currently, China’s military has only one overseas base, in Djibouti.
Beijing insists its international partnerships aim for common development, but it has also lambasted Washington’s global network of military bases.
An editorial in the state-run nationalist tabloid Global Times on Thursday said the “recurring rumor” of a Chinese naval base in Cambodia has been repeatedly debunked.
But it added that “if one day, out of the need to safeguard national interests and assume international responsibilities and obligations, China decides to build new overseas supply bases, it will be aboveboard.”
“The US has no right to point fingers and interfere in the legitimate and mutually beneficial cooperation between other countries,” the editorial said.