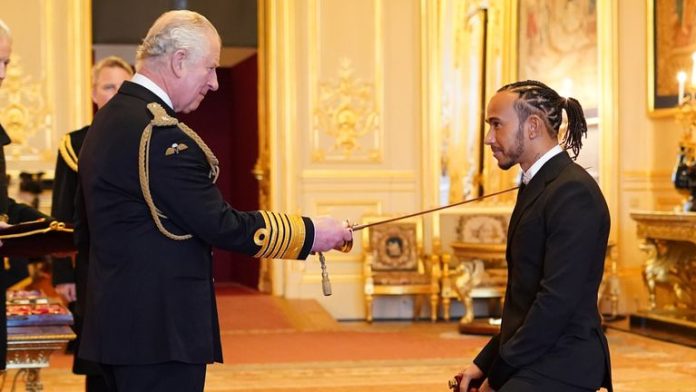 Lewis Hamilton has been made an honorary citizen of Brazil, a move which Hamilton himself backed in April; He has had a long affinity with the country with Ayrton Senna being his idol; watch Hamilton take part in the Azerbaijan GP, live on Sky Sports F1 from Friday

Lewis Hamilton was made an honorary citizen of Brazil on Thursday as the lower house of parliament passed a bill on the matter.

The move had been proposed by congressman Andre Figueiredo after last year’s Brazilian Grand Prix, at which the British driver unfurled the Brazilian flag after winning at Sao Paulo’s Interlagos circuit.

Seven-time world champion Hamilton himself backed the move in April, when he visited Sao Paulo to deliver a keynote speech at an event focused on business and digital transformation, saying he would be honoured.

The house will now hold a solemn session to deliver the 37-year-old the honorary citizenship. A date is yet to be set.

Hamilton has long had an affinity with the country, whose legendary Formula 1 driver Ayrton Senna is his idol, and he claimed his first world championship there in extraordinary circumstances in 2008.

Hamilton, knighted by his own country, had his name chanted along with that of Senna, a local hero, as he carried Brazil’s flag on to the podium last year.

Congressman Jhonatan de Jesus of the Republicans party said in a report that Hamilton has a “deep and strongly emotional” relationship with Brazil and the tribute was well-deserved.

“His gestures add to his indisputable sporting merit. His public positions in support of relevant issues such as the environment, animal rights, Black people, women and human rights must also be remembered and highlighted,” Jesus said.

The Congress vote was largely symbolic as the debate lasted for about 10 minutes. Some members of Congress, however, met the bill with criticism.

“I recognise Lewis Hamilton’s achievements…but this bill makes clear that we are not addressing Brazil’s structural problems as a priority,” Tiago Mitraud of the New Party said.

From a young age, Hamilton only had one idol he aspired to be like. Not Nigel Mansell, not Damon Hill, but Ayrton Senna – the influential and rapid Brazilian driver who won three F1 titles in the late 1980s and ’90s.

His tragic passing after a crash at Imola robbed the sport of one of its finest ever drivers and Brazil of a national hero, and a devastated Hamilton – who was nine at the time – only grew fonder of his idol.

Throughout his junior and most of his F1 career, Hamilton wore a yellow helmet in tribute to Senna while it was the Brazilian’s records that the Englishman always had his sights on.

Upon matching Senna’s pole tally of 65 in 2017, an emotional Hamilton was given one of Senna’s race helmets by his family.

Senna has been Hamilton’s biggest inspiration during his rise to becoming F1’s most successful driver, while he also has many fond Brazilian GP memories.

While Hamilton did not claim his first victory at Sao Paulo’s Interlagos circuit until 2016, he won his first title there in 2008, and infamously on the last lap and at the last corner after overtaking a slowing Timo Glock.

His other victories at the circuit came in 2018 and in 2021, when he magnificently charged through the field in both the Sprint and the race, claiming a win that closed Max Verstappen’s title lead.

Josh Rock: I will do everything I can to become No 1 and world champion

Prince and Princess of Wales attend Celtics vs Heat game

Jones: ‘Sad’ Woodward hasn’t a lot to do with his life if he’s criticising me

Josh Rock: I will do everything I can to become No...

Royals’ overshadowed US trip to end with Biden meeting and Eilish...