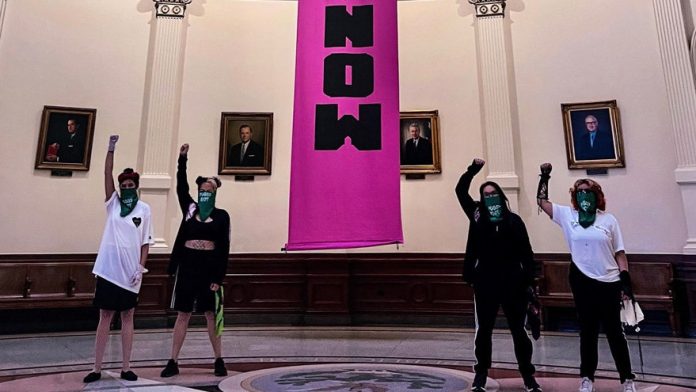 Pussy Riot held a demonstration demanding abortion rights at the Austin Capitol Building in Texas today (June 9). The protest was a joint effort between the Russian activist punk band, anonymous feminist group Unicorn, and the Lakota Indigenous femme led Ikiya Collective. They marched to the government building and unfurled a 45 foot pink banner that read “Matriarchy Now” from the third floor balcony. The moment—which you can watch below—will be minted as an NFT and auctioned via Party Bid; 100% of all funds raised will go to reproductive rights.

“Body autonomy is a pillar of modern civilization,” the demonstrators wrote in their Matriarchy Now Manifesto. “There’s no human rights as we know them without body autonomy taken as an axiom. People with wombs demand body autonomy. We demand our rights, we don’t ask for it. Don‘t like abortions? Don’t make them. Oh yes, and did you know? Vasectomy prevents abortions.”

Ikiya Collective knows that violence to the body is violence to the land. Since the violent onslaught of colonization, settler patriarchy has violated the sacredness of Indigenous bodies and lands. We see this happening clearly in the so-called state of Texas. For our ancestors, for our lands, for our future generations, we will stand for the land and fight for reproductive justice that grants us the bodily sovereignty we have been denied for too long.

Pussy Riot, Unicorn, and Ikiya Collective members wore gopnik tracksuits and green scarves during the demonstration—a nod to the ensembles popularized in Latin America during the reproductive rights fight. In a press release, it was noted that Austin’s State Capitol Building is located on Coahuiltecan, Tonkawa, Comanche, and Apache lands.