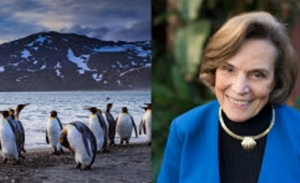 Applications for these sought-after spots are open to all that are interested, with Aurora particularly welcoming registrations of interest from thought-leaders in the fields of science, art, education and economics, alongside inquisitive teenagers and corporate executives.

Limited to about 100 expeditioners from around the world, this Climate Expedition is led in partnership with Ocean Geographic and will confront the consequences of environmental change, the warming climate, and the loss of sea ice in the southern polar region whilst visiting some of the most spectacular wilderness regions of Antarctica.

Comprising conservationists, high-profile personalities and ocean luminaries, the summit will raise public and government awareness of the splendour and importance of the Antarctic, whilst also formulating an outcome of 23 resolutions to inspire transformative change for global net-zero emissions by 2050.

“February 2023 will be a moment in time of a gathering of great minds, a brains trust, for commitments to resolve what it takes to move from where we are now to a better future,” says Dr. Earle.

“The importance of this expedition is to get people together who have different gifts, talents, capabilities, and powers, and come back with a commitment to take a new direction. It’s meant to provoke thought that will lead to action.”

Other outcomes will include a series of lectures, a feature documentary, exhibitions, and a book

“This is a unique opportunity to be part of a pivotal and far-reaching expedition,” says Aurora Expeditions’ CMO Hayley Peacock-Gower.

“We invite you to discover the beauty and majesty of Antarctica, whilst being part of the legacy that can have a real impact on creating a sustainable and habitable planet.”

The groundbreaking 12-day Antarctic Climate Expedition starts on February 13, 2023, with 2 nights and a full-day conference in Ushuaia, Argentina followed by a 9-day voyage on board Aurora Expeditions’ brand-new ship, the Sylvia Earle, and ends with a post-voyage night in Punta Arenas, Chile.

Named in honour of Dr. Earle, the new purpose-built ship where the Antarctic Climate Expedition will take place is intended to be a floating ambassador for the conservation of the planet. Certified 100% Carbon Neutral and outfitted with a dedicated, fully equipped Citizen Science Centre amongst many other modern amenities, the ship also pays tribute to six pioneering female conservationists from around the world alongside Dr Earle, who are honoured on each of the ship’s public decks: Joanna Ruxton, Dr. Asha de Vos, Hanli Prinsloo, Dr. Carden Wallace AM, Bernadette Demientieff and Sharon Kwok.