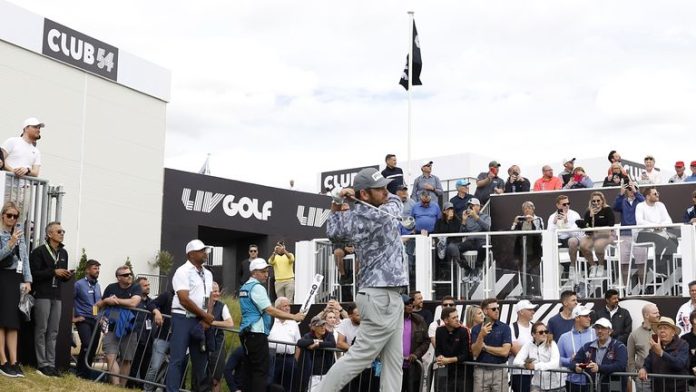 Charl Schwartzel, who started from the third hole in a “shotgun start” at the controversial $20million, 54-hole event, tops the leaderboard ahead of compatriot Hennie du Plessis; 17 players suspended by the PGA Tour for featuring in the Saudi-backed series

Phil Mickelson marked his competitive return to action by getting within four strokes of the early lead at the opening event of the Saudi-backed LIV Golf Invitational Series.

The six-time major champion was a late addition into the field at the Centurion Club, having ended his four-month hiatus from the professional game for “reckless” comments around Saudi Arabia’s human rights record and the PGA Tour’s “obnoxious greed”.

Mickelson marked his return with a one-under 69, keeping him in touch with early pacesetter Charl Schwartzel, although events off the course and the power struggle with the PGA Tour dominated the first round of the 54-hole event.

Shortly after the 48-man field got under way at the same time in a “shotgun start”, the PGA Tour sent a memo to members outlining that all players competing in Hertfordshire would be “suspended or otherwise no longer eligible to participate in PGA Tour tournament play”.

Former world No 1 Dustin Johnson and European stars Sergio Garcia, Martin Kaymer, Graeme McDowell and Lee Westwood were among the 17 players suspended, having teed it up despite getting refused permission, although all but Mickelson had already resigned from the PGA Tour.

Ian Poulter said he intended to appeal against his suspension, while LIV Golf responded with a statement calling the PGA Tour’s move “vindictive” and guaranteeing that “this certainly is not the last word on this topic”.

Former Masters champion Schwartzel is also in the list of players now ineligible to play on the PGA Tour, although the South Africa responded with an opening-round 65 to hold a one-shot advantage over compatriot Hennie du Plessis.

The pair are part of the “Stingers” team, one of 12 four-man squads selected in Tuesday’s draft, with their fast starts giving them a six-shot advantage in the team competition where the winning quartet shares an extra $3m on top of their individual prizes.

Scot Vincent and Phachara Khongwatmai are two strokes back in tied-third, with South African duo Branden Grace and Justin Harding both in a share of fifth on two under.

Mickelson started slowly with a three-putt bogey at the fourth and double bogey at ninth, only to post three birdies in a four-hole stretch from the 12th to join Johnson in the group tied-seventh.

“I really enjoyed today,” Mickelson said. “It was fun for me to get back out playing.

“I struck the ball really well and didn’t putt very well. I really struggled with the putter the front, the first six, seven holes but I played really well and fought back after a double on nine to shoot one under and get myself right in it on the first day.”