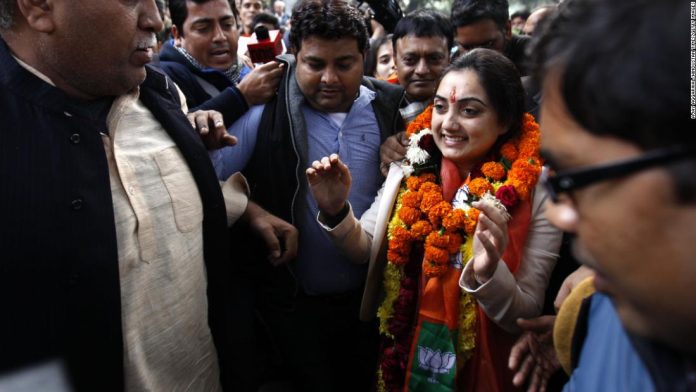 The United Arab Emirates, Malaysia, Oman, and Iraq are among at least 15 Muslim-majority nations to have condemned the remarks, which were described as “Islamophobic,” with several countries summoning India’s ambassadors.
The incident sparked protests in neighboring Pakistan and prompted calls from around the region to boycott Indian goods.
India’s Hindu nationalist ruling Bharatiya Janata Party (BJP) disciplined the two officials involved, but the firestorm involving India’s major Arab trade partners is yet to die down.
Here’s what you need to know.

What is causing the backlash?

At the center of the controversy is Nupur Sharma, now suspended national spokesperson for the BJP — the party of Indian Prime Minister Narendra Modi.
On May 26, Sharma made comments during a televised debate on an Indian news channel about the Prophet Mohammed that were widely deemed offensive and Islamophobic.
Most Indian news outlets have not directly quoted Sharma’s original comments.
Sharma later withdrew her remarks and said it was never her intention to “hurt anyone’s religious feelings.” On Twitter, Sharma said her words were a response to derogatory comments made during the debate about a Hindu god.
“If my words have caused discomfort or hurt religious feelings of anyone whatsoever, I hereby unconditionally withdraw my statement,” she said.
Another BJP spokesperson, Naveen Jindal, who has since been expelled, had also made comments about the Prophet on social media.

The BJP said on June 5 it had suspended Sharma and expelled Jindal from the party.
“The Bharatiya Janata Party is also strongly against any ideology which insults or demeans any sect or religion. The BJP does not promote such people or philosophy,” the party said in a statement on June 5 without directly referring to the comments from Sharma or Jindal.
Police in the Indian capital Delhi have also registered cases against Sharma and several others accused of disrupting public tranquility and incitement, according to a tweet from the Delhi police’s official Twitter account.
A complaint was also earlier filed in Mumbai against Sharma for her inflammatory comments.
On June 8, Indian police said they had arrested a former BJP local youth leader in the northern city of Kanpur for posting inflammatory content on social media about Prophet Mohammed.
The incident has led to protests among the country’s Muslim minority in several states. In Uttar Pradesh’s Kanpur on Friday, at least 54 people were arrested in connection with the protests, senior Kanpur police official Pramod Kumar told CNN.

The BJP’s move to suspend its spokesperson failed to stop the controversy escalating beyond India’s borders.
Qatar, Kuwait and Iran summoned India’s ambassadors, and the Gulf Cooperation Council, Saudi Arabia, the UAE and the Organization of Islamic Cooperation issued statements of condemnation. Malaysia was the latest country to condemn the remarks. Its Ministry of Foreign Affairs summoned the High Commissioner of India to Malaysia on Tuesday to convey their “total repudiation over this incident.”
Protesters in the Pakistani city of Lahore called on Indian Prime Minister Modi to issue an apology. And some stores in Kuwait have removed Indian products from their shelves following similar calls for a boycott.
The hashtag “Anyone but the Prophet, oh Modi” has been trending on Twitter in all six Gulf countries, and as far away as Algeria. Oman’s outspoken Grand Mufti Sheikh Ahmad Al-Khalili, the chief religious figure in the country, called Sharma’s comments “a war on all Muslims” and a matter that “calls for all Muslims to rise as one nation.”
Modi has not publicly commented on the incident but Indian embassies in Gulf nations have made statements saying the comments “do not, in any manner, reflect the views of the government of India” and the government “accords the highest respect to all religions.”
CNN has reached out to India’s Home Affairs Ministry for comment.

Threats from al-Qaeda in the Indian Subcontinent

Depictions of Islam’s Prophet are considered blasphemous by many Muslims and offending images or comments have in the past led to mass boycotts, diplomatic crises, riots and even terror attacks.
On June 8, the terrorist network al-Qaeda in the Indian Subcontinent (AQIS) issued a statement condemning the remarks from the BJP officials and called for revenge, warning they will “find refuge neither in their homes nor in their fortified army cantonments.”
But Mohammed Sinan Siyech, a senior analyst at the International Center for Political Violence and Terrorism Research, said that such threats are more of a recruitment strategy than a solid plan.
“In some ways this is them trying to publicize their views rather than taking action,” Siyech said.
AQIS had not recruited many people since forming in the subcontinent in 2014 so might not have the capacity to carry out such an attack, he said.
In 2015, Islamist militants attacked the offices of French satirical magazine Charlie Hebdo, which had printed cartoons of the Prophet, and a Jewish supermarket in Paris, killing 17 people.

Attitude to Muslims at home

For many of India’s 200 million Muslims, Sharma’s comments were not an isolated incident.
They came amid a broader trend in India, which has cracked down on its minority Muslim population ever since Modi’s BJP came to power nearly eight years ago.
Analysts say there has been a rise in support for extremist Hindu nationalist groups and suspected hate crimes against Muslims since 2014.
In January, a senior member of the right-wing Hindu Mahasabha political party called on her supporters to kill Muslims and “protect” the country. It triggered an outcry made worse by the subsequent lack of arrests.
In February, the southern state of Karnataka banned headscarves in classrooms, sparking protests in the state and major cities including the capital New Delhi. The demonstrations prompted rival protests from right-wing Hindus who chanted a religious slogan in support of the BJP.
In 2018, India’s current Home Minister Amit Shah said Muslim immigrants and asylum seekers from Bangladesh were “termites” and promised to rid the nation of them. And between 2015 and 2018, vigilante groups killed dozens of people — many of whom were Muslims — for allegedly consuming or killing cows, an animal considered sacred by Hindus, according to Human Rights Watch.
In 2019, India’s Parliament passed a bill that would give immigrants from three neighboring countries a pathway to citizenship — except for Muslims. It led to extended protests and international condemnation.
And in December 2020, Uttar Pradesh enacted a controversial anti-conversion law, making it more difficult for interfaith couples to marry or for people to convert to Islam or Christianity.
All of this, analysts say, is evidence that Modi and his BJP party have pushed an agenda of Hindu nationalism onto secular India, a country of 1.3 billion people.

Analysts said Modi has walked a tightrope between keeping his Muslim international allies happy while pushing his party’s Hindu nationalist agenda at home.
“Modi has tried very hard to prevent his party’s domestic political agenda from spilling over and poisoning India’s relations with the Gulf states,” said Hasan Alhasan, a Bahrain-based fellow at the International Institute for Strategic Studies who researches Indian foreign policy in the Gulf.
“The extent to which Sharma’s comments have clouded India’s relations with the Gulf states is unprecedented, and that’s of course because she is, or was, the spokesperson of the BJP.”
India has much to lose if it can’t keep a lid on the controversy. It comes as Gulf states and India look to enhance their economic partnership.
India, the world’s third-biggest importer of oil, looks to the Middle East for 65% of its crude. The South Asian nation also sends to the Gulf states millions of workers who send home billions of dollars in remittances each year. And the UAE has singled out India among seven other nations as its future economic partner.
The Gulf states are key sources of India’s oil and gas imports, with bilateral trade worth more than $100 billion, according to Alhasan.