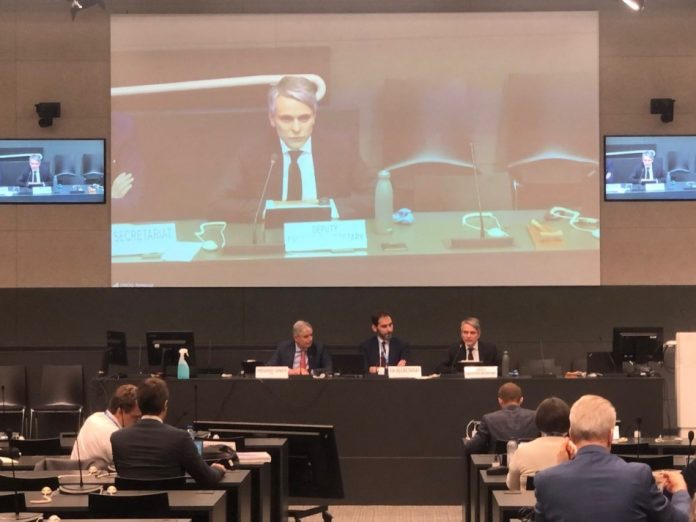 The workshop, which was a joint initiative of the United Nations Economic Commission for Europe (UNECE) and the FIA, was organised on the occasion of the 160th session of the UNECE Working Party on Customs Questions affecting Transport (WP.30).

Chaired by FIA Tourism Services Director Mr. Habib Turki, the meeting was opened by UNECE Deputy Executive Secretary Mr. Dmitry Mariyasin and FIA Senate President Mr. Carmelo Sanz de Barros. Mr. Mariyasin highlighted the relevance of the two temporary importation conventions within the framework of the United Nations legal instruments in the field of border crossing facilitation and the urgent need to digitalise them. The FIA Senate President recalled that the objective of the FIA is to create a highly secure, reliable and user-friendly solution for the 1954 and 1956 temporary importation conventions. This would aim to facilitate cross-border mobility for many motorists, expatriate workers and transport operators throughout key economic corridors, while giving customs authorities and other government agencies the necessary financial and security guarantees.

UNECE’s Mr. Artur Bouten delivered a presentation on the status and main provisions of the 1954 and 1956 temporary importation conventions and their role in facilitating the crossing of borders.

FIA Tourism Operations Manager Mr. Björn Nordlund elaborated on the use of the CPD system and the roles and responsibilities of the various stakeholders. He explained the functioning of the recently introduced QR-codes attached to CPD booklets which give immediate and significant risk management value for CPDs and a centralised online FIA-to-Club purchasing system allowing for prevention of counterfeiting. Finally, he gave an extensive description of the claim raising and resolution process stipulated by the two conventions.

UNECE’s Mr. Konstantinos Alexopoulos and FIA’s Mr. Habib Turki described how to gradually move from the paper-based CPD to the electronic CPD (eCPD). To define that process, they relied on the lessons learnt from the conversion of the TIR system into eTIR, among other things.

Mr. Christopher Davies from the Australian Border Force (ABF) talked about the Australian experience with the CPD system for vehicle importation and its aspirations for the future eCPD system, within the overall efforts to digitalise customs procedures at borders. He highlighted that such a system would significantly improve their storage efficiency and verification processes.

FIA Member Organisations were then invited to share their practical experience with the use of the CPD. On behalf of the Australia Automobile Association (AAA), Mr. Habib Turki took the floor to present the “CPD Trip Planner”, an application that makes vehicle owners familiar with all requirements in the countries of transit and destination when planning a trip.

The Emirates Motorsports Organization (EMSO) Mobility Director Mr. Adel Sarris then shared a case study on how the United Arab Emirates have moved to an electronic CPD service.

Finally, delegations thanked UNECE and the FIA for organising this high-level workshop and various countries and organisations expressed an interest to replicate the workshop any time soon for their country or region.