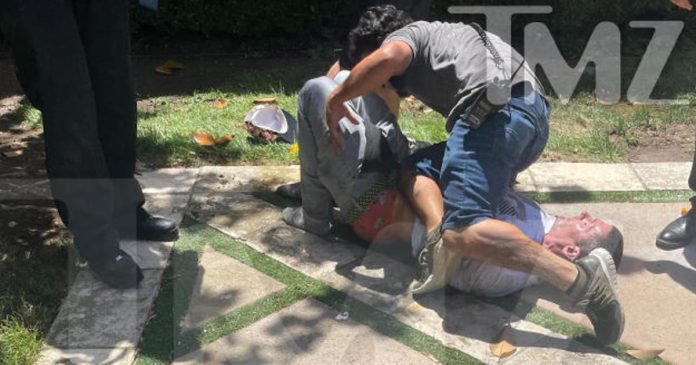 Britney Spears’ ex-husband Jason Alexander was arrested on Thursday after he tried to crash her wedding to Sam Asghari. Alexander was detained by private security shortly after 2 p.m., before the wedding began, at Spears’ home in Thousand Oaks, California, according to the Ventura County Sheriff’s Department, CBS Los Angeles reports.

Deputies soon arrived and arrested Alexander for an outstanding warrant from Napa. He now faces additional charges. CBS News has reached out to Ventura County and Napa County sheriffs departments for more information and is awaiting response.

Spears and Alexander got married in Las Vegas in 2004, but had the marriage annulled 55 hours later.

Alexander live streamed himself approaching Spears’ house on Instagram. The footage was obtained by TMZ, who first broke the story. He made it inside the home, and told security that Spears had invited him. Then, he began shouting for Britney.

In another part of the video, Alexander is outside and asks someone else, “Where’s Britney?”

Officers eventually detained him and his live stream cut out. TMZ also obtained a photo of officers detaining Alexander on the ground.

Earlier in the day, Alexander posted a video on Instagram calling for everyone in Spears’ life to be investigated.

In 2020, fans spotted Alexander at a “Free Britney” rally when the pop start was fighting to end her conservatorship.